As regular readers will know, we grew increasingly concerned about the rising cattle market in mid-April through early May. Of course, price gains are always a good thing for producers. But when cash markets and futures performed as well as long as they did since last fall’s low, it seemed prudent to start watching for clues the inevitable slide down the other side of the hill was about to begin. 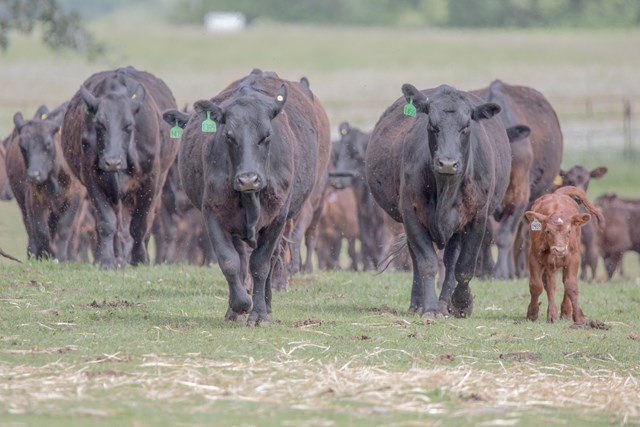 As regular readers will know, we grew increasingly concerned about the rising cattle market in mid-April through early May.

Of course, price gains are always a good thing for producers. But when cash markets and futures performed as well as long as they did since last fall’s low, it seemed prudent to start watching for clues the inevitable slide down the other side of the hill was about to begin.

Our May 16 report noted: “the high-flying cash fed cattle markets do seem to be showing some jitters.”

Now, there’s another reason to be worried the seven-month plus climb in cattle markets may be in more trouble.

Released on Friday (June 23), the USDA’s latest cattle on feed report pegged placements in feedlots during May at 2.12 million head, a 12% increase from the same month a year earlier and topping pre-report trade guesses for a more modest 10% gain.

It’s easy to see the basic trend here: more cattle on feed now mean more beef. The basic laws of supply and demand suggest that when supplies are heavy, prices will weaken. So, if more cattle are being placed into feedlots, then more will be coming to market. If prices are to be maintained, it will be up to the demand side to absorb the extra.

The export market has been a bright light for the American industry so far this year and the April numbers – although not as outstanding as earlier in the year – remained strong. U.S. beef exports reached 99,786 tonnes for the month, up 13% from a year ago. For January through April, beef exports were up 14% in volume and 18% in value compared to the same period last year.

And while it may take some time for shipments to really take off, U.S. beef is officially now back on the list of products eligible for export to China after a multi-year absence.

Interestingly too, it looks like Brazilian beef will be kept off various country’s shopping lists for a while and U.S. imports of beef from that country have been suspended. This won’t be a big market factor but is worth noting as a small one.

Domestic demand prospects look decent as well, given good economic conditions in the U.S. including an unemployment rate that’s at a 16-year low.

Strong margins are also providing packers with plenty of incentive to keep their plants running as close to capacity as possible.

But can the demand side do all the work?

Notwithstanding a solid base of demand both domestically and offshore, as supplies pile up it may become necessary for prices to drop further to clear all the beef that’s produced.

In some key markets, cash prices are down sharply already, after topping around May 5.

For their part, August live cattle futures peaked May 4 and tested the peak June 6, at above US$126/cwt, before sliding more than $10. They recovered a portion of that the past few days. 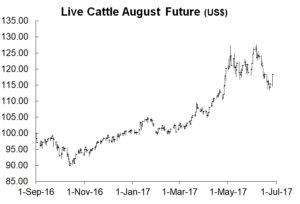 Cash fed cattle have been weaker than futures lately – as we pointed out would happen – due to the deep discount of futures to cash during May. Futures are still below cash prices so don’t be surprised if futures bounce sharply now and then, even if the general cash price trend stays weak.

It’s hard to say when and where this weak spell will end. August will sometimes see a seasonal low for cash cattle and futures, so that’s a possible timeframe for a low for cash and futures.

The feeder cattle index on which futures are based peaked June 9 at a little above $154/cwt. Aug and Sept futures saw peaks May 4 and June 5 at slightly over $160. Their premiums over cash made them vulnerable, as we warned, and hedging opportunities were there.