Where’s the Low for Feeders?

Last posting, we took a look at downside objectives for live cattle futures; this week let’s look at feeder cattle futures. First, a refresher on our previous post. It concluded the worst was over for live cattle futures, at least for the time being. Several deferred contracts had plunged to the US$112/cwt area, seemingly low enough to account for a lot of bearish developments.

First, a refresher on our previous post. It concluded the worst was over for live cattle futures, at least for the time being. Several deferred contracts had plunged to the US$112/cwt area, seemingly low enough to account for a lot of bearish developments.

Now, how about the bear market for feeders? It’s been just about as severe as the bear for live futures. From the record-high peak in 2014 of about $240, nearby feeder futures recently notched trades below $140.

That $100 break represented more than the total value of feeder cattle on lots of occasions as recently as 2000 through to 2010.

This is a commodity that lost more than 40% of its value in less than 18 months!

After such a massive loss, you have to think the market is ready for a bounce. It has taken a small bounce in the past few weeks but so small it hardly registers on the 25-year picture below.

If the current bounce fails soon and the market takes another step down, that’s where you can expect prices to head.

A second support zone, a more significant one, rests at $120. But we’re skeptical nearby futures will get that low the next few months during the current down move. 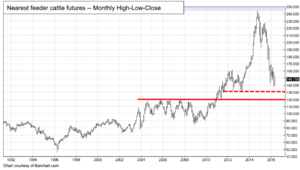 There’s also a chance the low is already in place. However, as the daily chart of August feeders shows, the market has not yet broken its primary downtrend line. The recent rally could be merely another correction before another leg down. 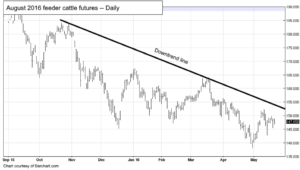 The fate of feeders lies partly in the hands of the finished cattle and corn markets. For its part, the corn market is more buoyant than during winter, showing moderate strength, which is normal for this time of year. If the US crop looks good in June and July and corn prices are under US$4/bu, feeders might find some support. If the US crop runs into trouble and corn futures move up toward $4.50/bu or higher, feeder cattle buyers will obviously be wanting to pay less for their placements.

Standing back and taking a look at the beef and total meat supply in the US, we see there’s lots of it. This basic fundamental factor doesn’t say much about exactly where the bear market for feeders will bottom (or where live prices will bottom) but it does suggest the markets are not without downside risk. It also hints whatever rallies get going will not be nearly as powerful as in 2014.

Weekly beef production more recently has been up sharply from a year ago, supporting the projections for generally rising beef supplies.

What’s more, initial projections for 2017 are for more increases.

It’s hard to say how much of the supply increase is already built into the downtrodden live cattle futures markets and by extension, feeder futures.

So the futures market is reflecting expectations of a weaker feeder market out into the spring of 2017.