What to expect next from the cattle super-cycle?

It should come as no shock that in general, cattle prices are under pressure and cattle feeding operations are seeing some red ink – after all, the long-term cycles in the cattle market tell us so. Our previous reports talked about a long-term super-cycle for cattle, with the cycle showing major run ups in prices about every 30 years or so. Measured in US currency, the last peak for this long-term cycle was in 2014. Within the larger super-cycle, we see smaller cycles averaging 10-12 years from low to low. The last cycle bottomed in 2009 and peaked in tandem with the super-cycle high in 2014. 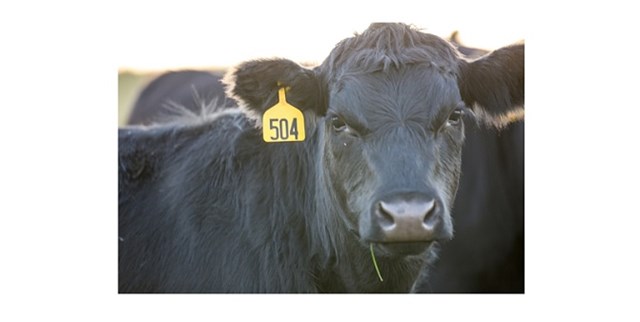 It should come as no shock that in general, cattle prices are under pressure and cattle feeding operations are seeing some red ink – after all, the long-term cycles in the cattle market tell us so.

Our previous reports talked about a long-term super-cycle for cattle, with the cycle showing major run ups in prices about every 30 years or so. Measured in US currency, the last peak for this long-term cycle was in 2014. Within the larger super-cycle, we see smaller cycles averaging 10-12 years from low to low. The last cycle bottomed in 2009 and peaked in tandem with the super-cycle high in 2014.

As most producers are now painfully aware, both cycles are in downswings at this time.

So where to from here? If we go back in history to see what happened in past cycles, we might have a better idea of what producers might be facing next.

What this report concentrates on is what happened after each boom peak.

The graph below shows US cattle prices (a composite monthly average produced by the USDA) the past 105 years. We have circled four booms and three subsequent declines. The first boom peak was in 1919, followed by a long-lasting levelling out period.

The second circle denotes the boom peak of 1950 which was followed by several years of lower prices.

The third circle outlines the major peak of 1979 which was followed by a weaker period, although the market managed to eek out a new high about a decade later.

The fourth run-up was the most recent one which peaked in 2014 – an exceptional high from which the market is now retreating.

Note that all four booms were part and parcel of a broader commodity boom which brought massive bull markets to a variety of other commodities. Cattle were participants in each boom, sometimes with a delayed reaction to soaring grain prices which forced herd cutbacks which in turn boosted cattle prices. 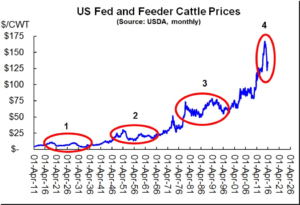 Now let’s break down each of those four areas circled to see what happened.

A great commodity boom took hold after World War I, with cattle tagging along for the ride. Between 1911 and 1919, prices for fed and feeder cattle rallied sharply, more than doubling before peaking at US$11.40 in May 1919, as shown by point A on the chart below.

As the Roaring Twenties took hold, prices moved higher again. In late 1928 and early 1929 prices were back in the $10 zone (Point C). However, the market failed to make new highs. Little did people know that incredibly tough times were ahead.

Point D on the chart illustrates the price crash that was part of the Great Depression and Dust Bowl years. By December 1933, average cattle prices were just $3.25. The full stretch from the super-cycle peak to the ultimate low was 14 years.

And it was an incredibly long climb back from the depths of the Depression: it was roughly 44 years before the market managed to clear the 1919 peak, during World War II. 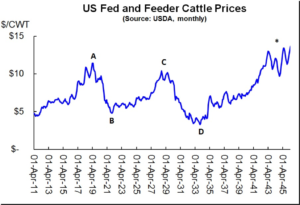 In the late 1940s and early 1950s, commodities bounded higher with the end of the second World War. Europe was hungry. Agricultural profits and farm assets were climbing. Commodities of all stripes were setting new highs.

As shown by Point A on the chart below, average prices surged after the second World War, approaching US$30 in May 1951 to notch a super-cycle peak.

However, just four years later a vicious bear market had taken hold (Point B). Prices were cut in half, eventually trading at $13.50 in December 1955.

But by the time the Beatles were arriving in North America the beef business was singing the blues again. In December 1964 average prices for fed and feeder cattle were down to $17.40 (Point D). That was well above the low seen 9 years earlier but down 27% compared to the peak notched 4 1/2 years before.

The recovery from Point D onward (as shown by the *) in the late 1960s and early 1970s was the result of inflation and asset price appreciation. 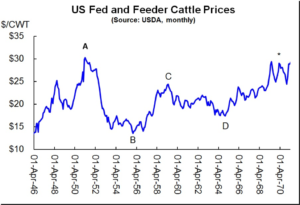 By 1973 a new commodity boom was underway. The Soviet Union came into the world grain markets, OPEC was formed to drive petroleum prices up, inflation took hold. Commodities boomed. Cattle surged in 1973 but it wasn’t until 1979 that the ultimate peak for the bull market was notched.

In May 1979, the average price reached US$71.90 (Point A, chart below), up 270% from the low of Aug 1975 and a peak still remembered by some people in the business today. There was considerable expansion in the feedlot sector of North America. The ensuing cattle decline was accompanied by surging interest rates which threw thousands of North American beef producers out of business.

Finally in 1991 average prices inched higher than the 1979 peak – roughly 12 years after the great boom. But that spate of strength was brief and was only for some types of cattle. Most feeder cattle did NOT exceed the 1979 highs until many years later.

It was not until the mid-2000s – roughly 25 years later – that producers experienced sustained, multi-year strength for various cattle weights, above that old high (as shown by the *).

This strength was not shared equally, as the BSE crisis closed some borders to international trade.

The late 90s were tough on those producers still standing after the 1980s (Point D). Most prices didn’t dip below those reached in the mid-80s but it was a low ebb for the industry, nevertheless. 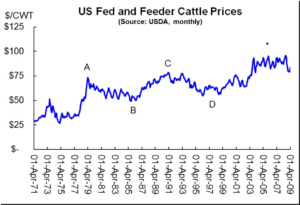 The levelling out period from the peak of 1979 did not see as deep a setback as the previous two mega peaks but times were as difficult, if not more so, due largely to high interest rates. It wasn’t until the 2012-14 timeframe that cattle really exploded and that only came after a tripling in feed costs made life difficult.

If the market follows the time window from previous mega-cycles, we should see a low sometime between roughly 2.5 years and 6 years (Point B), which would be from mid-2017 to late 2020.

From the super-cycle peak to the initial low, we would not expect a decline of more than about 50% to around $82. That’s not to say a steeper decline couldn’t happen, just that it didn’t in the previous experiences the past 100 years.

For the futures market, deferred months are trading under $115. If cash prices get that low, the percentage decline from the high would be in the 33% zone.

We won’t speculate too far out but if the cycles of old continue, you might tentatively expect the recovery rally to take prices higher into the 2022 – 2025 timeframe (Point C).

If this drive higher actually happens, it could recapture a considerable portion of the initial decline. While it is not impossible that this anticipated upswing takes some cattle markets to new highs above the historic 2014 peak, it is doubtful. Indeed, it’s more likely that the upswing fails to actually challenge the 2014 high point. 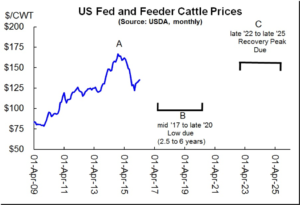 This piece is presented not to make predictions. Instead it’s designed to create some big-picture ideas about when prices might see cyclic upswings and downswings – if the cycles of old continue.

The mega-cycle is actually less reliable than the 10-12 year cattle price cycle but the existence of the 10-12 year pattern is integrated into the timeframes during which the next low, and the upswing after it, might be expected.