As discussed in previous posts, North American cattle producers have now suffered through about two years of tough times – the painful bust period that followed the biggest bull market in history. 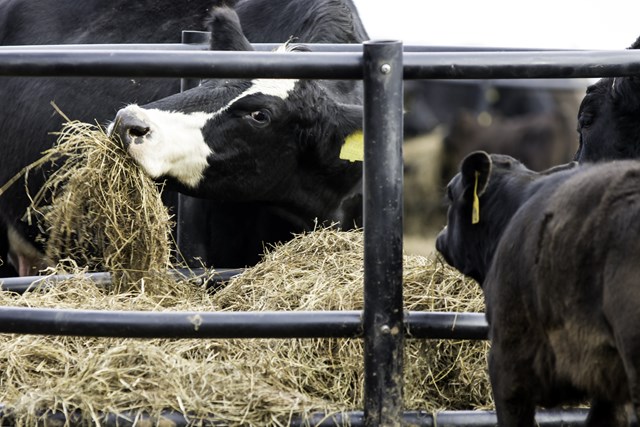 As discussed in previous posts, North American cattle producers have now suffered through about two years of tough times – the painful bust period that followed the biggest bull market in history.

And while our Nov. 2 update suggested that some of the indicators that suggest a bottoming market are being seen now, including overwhelmingly bearish sentiment, the fact remains it is going to take considerably more time yet before the echo of the big supply that formed in the wake of record high prices in 2014 finally subsides. As producers know, it can take years before an expanding cattle supply translates into more beef, and the opposite is true as well, with cutbacks in the nationwide herd actually resulting in more meat on the market – at least temporarily – as heifers that were once held back for breeding are sent to slaughter instead.

In its latest supply-demand update, released Nov. 9, the USDA projected 2016 U.S. beef production at just over 25 billion lbs, up from the October estimate of 24.9 billion and 5.7% above the previous year. With an expected year-over-year increase in production as well, total American red meat output for this year is forecast at 50.22 billion lbs, versus 50.1 billion in October and 48.43 billion in 2015.

Looking farther out, the upward production trend continues. For 2017, the USDA is forecasting total beef production of 26.16 billion lbs, up from 25.88 billion in October and 4.4% higher than the current year. Pork is production is also expected higher, meaning total red meat supplies are set to further increase as well. 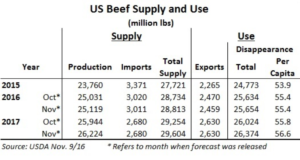 Meanwhile, the U.S.-based the Livestock Marketing Information Center is also forecasting year-over-year increases in quarterly red meat production to continue in 2017 and 2018. For beef alone, the LMIC is predicting production at 2% to 5% above the 2017 level.

At least part of the blame for those hefty production forecasts can be obviously be attributed to the availability of low-priced grain. Indeed, the USDA’s November supply-demand update pegged total American corn production for 2016 at 15.226 billion bu, up 168 million bu from last month’s estimate based on a nearly 2 bu/acre increase in the average yield to 175.3 bu, a new record high and well above the previous year’s 168.4 bu average.

There’s also plenty of off-grade wheat making its way into feed rations, with some wheat prices in the U.S. at their lowest since 2006.

The USDA did offset the larger supply to some extent by raising corn use for ethanol by 25 million bu to 5.3 billion bu, while food, seed and industrial use was bumped 60 million bu higher to 6.735 billion. However, the bottom line result was an 83-million bu increase in the 2016-17 corn ending stocks figure to 2.403 billion bu, well above 1.7 billion bu the previous two years and a level that is likely to keep corn prices cheap enough for livestock producers to keep churning out animals.

The same can be said for soybeans, with 2016 U.S. production and yields expected record high and soybean meal seemingly set for continued price erosion versus soybean oil over the next one to two years.

So with the livestock markets already under pressure now from heavy meat supplies, how will even higher production in 2017 and 2018 be absorbed by the market?

With the U.S. population only growing by less than 1% per year, the answer will obviously have to lie in exports.

To that end, the market received some encouraging news earlier this month, with September U.S. beef export volume at 101,224 tonnes, down slightly from August but 27% above the same month last year. For January through September, export volume was 8% above last year’s pace at 848,930 tonnes. In total, beef exports accounted for 13.5% of total beef production in September.

The USDA is projecting U.S. beef exports will climb in 2017, increasing to an estimated 2.63 billion lbs from 2.45 billion in 2016, although that alone won’t be enough to sop up all of the extra forecasted production.

When we integrate these fundamental factors into the cyclic patterns, seasonal odds, sentiment signals and the hints from the chart patterns we keep an eye on, it seems that a price bounce which started recently might have more legs, and cattle producers might see some better prices for several weeks or months.

However, those better prices will probably be just moderately better. The massive price and profit peak of 2014 is standing out taller and taller in history as a giant marker that will be difficult, if not impossible to come even close to, even with a 10-12 year time horizon.