As equine practitioners, we use the word choke to describe an esophageal obstruction. This condition will present itself as a horse begins to exhibit signs of distress including the expelling of feed from both nostrils, coughing, and retching. It is an immediate medical emergency. As this condition begins, feed and saliva move into the naso-pharynx creating immediate aspiration pneumonia. 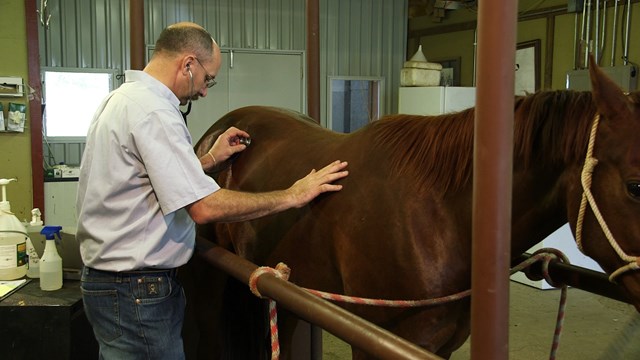 As equine practitioners, we use the word choke to describe an esophageal obstruction. This condition will present itself as a horse begins to exhibit signs of distress including the expelling of feed from both nostrils, coughing, and retching. It is an immediate medical emergency.  As this condition begins, feed and saliva move into the naso-pharynx creating immediate aspiration pneumonia. Even if the horse is able to breathe at this point, the obstruction, if left in place will cause ischemic necrosis of the esophageal mucosa and can cause scarring resulting in chronic choke.

The esophagus is a collapsed tube unless food or water is passing through. This allows for its elasticity and ability to pass nutrients from the mouth to the stomach. The esophagus begins above the trachea then generally deviates to the left side of the neck next to the trachea. It enters the thoracic cavity along with the trachea, and then passes over the base of the heart and on to the stomach. The anatomy of the esophagus does not allow for the horse to vomit or forcibly remove an obstruction.

The primary cause to choke in horses is the ingestion of feeds that are not adequately chewed. Obstructions often occur at the thoracic inlet, and the base of the heart with feed and saliva backing up until it spills out the nose. Horses produce approximately 1 litre of saliva/hours so once an obstruction is in place the esophagus will fill with saliva. Pelleted feeds are commonly implicated in ‘chokes’ as they are easy for a horse to eat and swallow regardless of chewing.

Other causes of esophageal obstruction include trauma, spider bites, penetrating wounds, foreign bodies and tumors. Typically, obstructions are washed (lavaged) out with fluids. However, obstructions can sometimes stretch the esophagus causing out-pouching, which can create a diverticulum (blind pouch). Once the diverticulum forms it grows by being stretched from the accumulation of solids and liquids. This is difficult to manage because they tend to grow larger over time.  Due to the difficulty of the management of these conditions, a case study has been shared below.

A 3-month-old foal on the mare arrived at Mobile Veterinary Practice (Amarillo, TX) that had previously been diagnosed with enlargement of the thyroid presumably from excess iodine in a supplement fed to the mare. This thyroid enlargement narrowed the esophagus causing the foal to choke when allowed to eat with the mare. The thyroid is just below the throatlatch.  This obstruction was so close to the beginning of the esophagus, it was difficult to manage. The obstruction extended to the opening of the esophagus at the tracheal cartilages. After an examination of the esophagus with an endoscope, we documented extensive mucosal damage.

A poor prognosis for long-term survival or quality of life for this foal was communicated that night to the owner. Upon hospitalization, the foal and dam were fed Alfa-Pro® (fortified ground alfalfa horse cube by Hi-Pro Feeds).  That night enough of the obstruction passed to allow the foal to eat and drink. I communicated this to the owner the next morning, and suggested that we keep the foal on Alfa-Pro as her sole source of forage with the agreement that if she choked again, we would euthanize.  The next day, the foal was weaned and coupled with another foal that had been previously weaned to minimize stress.  After 13 days on this regimen the foal’s esophagus was examined with an endoscope again.  There was no evidence of choke and the mucosa had healed.  The foal was discharged to the owner with instructions to continue the feeding regimen for 3 months.

This is a singular case report of the application of Alfa-Pro for long-term treatment of a choke, but shows that it was safe to feed in prevention of short-term recurrence.  In most cases we will wet the pellets to decrease the chance of recurrence.  However, in this case we did not without any adverse effects.

Choke is a serious condition that can be scary for both horse and owner.  In circumstances where horses may develop diverticulum (pouching) in the esophagus causing chronic choke, Alfa-Pro from Hi-Pro Feeds is a good option. The fortified alfalfa cube breaks down easily upon salivation and mastication of the horse.  It is a highly digestible product that provides all the necessary micronutrients in many situations.  For more information on Alfa-Pro visit the product page.