Bull Market Peak. What It Means for the Future.

Following the massive bull market peak of 2014, the cattle market has come back to earth, with prices and producer profits both taking a beating. For their part, the nearby cattle futures ended the first week of January at a shade under $133, down almost 23% from the record-high peak price of $171.17 in November 2014. 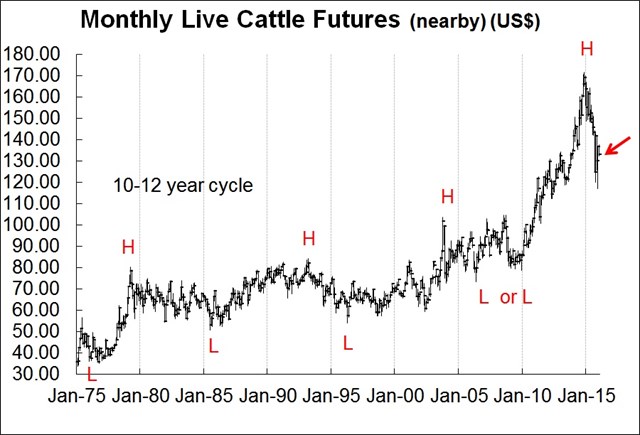 Following the massive bull market peak of 2014, the cattle market has come back to earth, with prices and producer profits both taking a beating.

From here, the cattle market is likely to chop up and down in totally unpredictable week-to-week action. But in the big picture the main, primary trend has a good chance of being down, and we can’t realistically expect the November 2014 peak to be revisited soon – possibly not for at least a decade.

If you’re getting old, now might be a good time to sell some of the herd or consolidate. It’s a bit late in some areas but not in others. In Canada, where a weak Canadian dollar has padded up prices in relation to the US, it’s probably not too late. You’re not hitting the typical 10 to 12-year cycle high for cattle and calf prices but you’re only a year late.

On the other hand, if you’re still in business and want to stay in it, the primary aim is to get through the next cycle low and come out the other side. You might not see the money you saw in 2013 and 2014 for quite a long time but it’s not likely the cow-calf business will sink into the depths of a serious depression either.

Indeed, what the herd cutbacks of the past several generations have done is clear the way for a better, stronger business in the future.

As most people who work with cows and calves already know, the seeds of the great bull market of 2013 and 2014 were sown back when ethanol production began to take off in 2006 and 2007.  With corn prices rising, pasture land was ploughed under and planted to crop. Around the same time, drought was taking a heavy toll on the US southern Plains, burning up pasture and forcing producers to liquidate their herds. The knock-out blow came with the historically high feed costs during the US drought of 2012. The result was a rapidly dwindling total American cattle herd that by the end of 2013 had dropped to its lowest since 1951.

However, with the ethanol boom over and rain chasing away the Plains drought, herd rebuilding is now underway. The latest USDA cattle inventory report showed the number of cattle and calves in the U.S. as of July 1, 2015 up 2% from the same time a year earlier, while the number of beef replacement heifers was up a much more robust 7%. The USDA will release its next cattle inventory report later this month and there’s little doubt it will indicate continued herd expansion.

In Canada, herd rebuilding isn’t happening but Canada’s total inventory only represents about 13% of what’s in the US, so the market-driving engine is the US supply.

Still, it’s hard to imagine the supply of calves in the US or Canada can build to surplus levels that choke off all profitability for a lengthy period. The cow-calf business is probably one of the best farming sectors to be in, if only because it went through such poor times for literally decades, which caused deep cutbacks out-ranking those seen in any other mainline farming sector.

In our business, we’ve talked to cow-calf people about farming through three cycle highs and then selling the herd on the fourth.

That gives you a working career in the business of 40 to 50 years. In Canada the previous 10-12 year cycle high was stolen away by BSE, in 2003. So this latest cycle peak was especially welcomed. For lots of cow-calf people, it was the fourth or fifth cycle high in their experience.  We know of a few sharp operators who sold out, and some who consolidated.

We also know of some sharp cow-calf operators who are happy to hunker down to take advantage of some tougher times. They’ll use the next several years as an opportunity to build their herds – they’re anticipating buying lower-priced breeding stock and looking forward to feed costs that are down from three to five years ago.

Working with cows on the rangelands, it’s best to have long-range vision. How you respond to the cycles depends in a large part on your age and succession plan. So let’s summarize our long-view thoughts:

Getting grey? Consider exiting if you don’t want to farm another 10-12 years for the next cyclic boom.

Still young? Brace for challenges the coming decade, and use those challenges to your advantage, building a solid foundation to take full advantage of the next cyclic upswing.