The people at Hi-Pro Feeds talk openly about the reason for their existence, which is simply to enrich the lives of the animals we feed, and the people we work with. We are only successful if we serve the customers we have, and improve the industry by building trust and adding value. 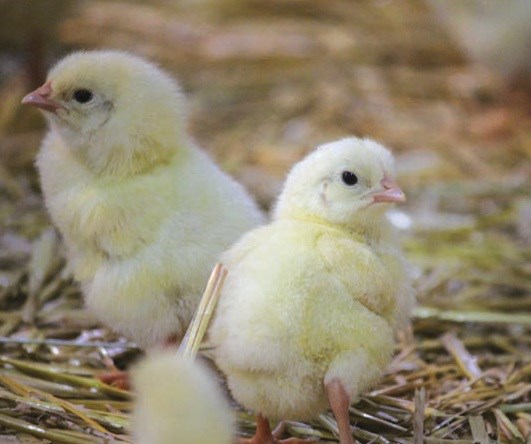 The people at Hi-Pro Feeds talk openly about the reason for their existence, which is simply to enrich the lives of the animals we feed, and the people we work with. We are only successful if we serve the customers we have, and improve the industry by building trust and adding value.

Over the past dozen years, Paul Goerzen and David Dyble at the Chilliwack mill in British Columbia have designed, executed, interpreted, and implemented new ideas coming from 78 different broiler research trials. Conducting practical hands-on research has been one very significant tool that the Hi-Pro team has used to strive to supplement the lives of the animals we feed and the people we work with.

“It was during period A51 in the spring 2003 that we started this process,” says Paul Goerzen, BC Regional Manager for Hi-Pro Feeds. “Dave and I, and his teenage daughter Shannon, closed out that first trial together. We have certainly come a long way since then.”

The research facility has 24 pens capable of housing 1,500 broiler birds. Each pen is identical to the others, allowing for scientifically-sound experimental design with multiple replications.

Measurement of individual bird weights for age and feed conversion performance is similar to that of commercial facilities. The 24 pens can be randomly assigned to treatments and replications in several configurations – for example, 6 reps with 4 treatments or other combinations.

“In addition to performance results, trials have been conducted to test the relationship between nutritional components and genetic ability of the bird with very low densityplacements,” Paul continues. “We have been able to determine significant differences between treatments at a 5% confidence level with only 2.5 points in feed conversion rate. That means a difference of only 0.025 feed conversions on a typical 1.60 FCR is scientifically significant between treatments – a highly desirable confidence level.”

Many of those trial results have been incorporated into commercial feeding programs across the Hi-Pro Feeds network. There are a few general lessons that seem to repeat, and remain true across our normal range of feeding programs, genetics and environmental conditions in western Canada.

1.       Space wins – In all cases, every time, and at all ages, broilers grow faster and more efficiently when allocated more physical space. Even in cases where the most crowded birds have more than ample access to feeder and water allocation, birds given even more physical space grow more efficiently (lower feed con- version) and at a faster rate (grams per day). The effect appears to have more to do with the number of bird-to-bird interactions than some optimal density, feeder space or water nipple allocation.

2.       Birds can feel feed – Compared to mammals, chickens have very few taste buds, but they do decide how much of a particular feed they want to voluntarily eat by how that feed feels in their mouth. The Chilliwack mill has multiple feed manufacturing lines and types of pelleting equipment. In all cases the birds refused to eat when the physical form of the pelleted feed was too hard. Based on their measured voluntary feed intake, modern broilers actually appear to prefer feed manufactured as a slightly softer pellet than a much harder one.

3.       Give them meat – Chickens are not vegetarians. They naturally and normally have a digestive system that is designed to process a mix of grains and meat products. Trial after trial has been conducted with veggie feed in attempt to gain the same health, growth and feed efficiency as seen with feed containing animal protein and fats. Repeatedly the team finds it outstandingly difficult to fully replace the nutritional value of animal protein with veggie based proteins. Even in cases where all known individual animal protein components are controlled and replaced with veggie or synthetic sources, regardless of the cost the same level of health, growth and feed efficiency cannot fully be achieved.

4.       Healthy gut, happy flock – Medications in the feed are used to control coccidiosis caused by Emeria protozoa and necrotic enteritis caused by Clostridial bacteria. Coccidiosis and necrotic enteritis can cause severe physical damage to the gut of a chicken. The balance of medications used to control these two groups of bugs has been a main topic of work. The health of chickens is important from perspectives of both welfare and flock profitability. The team has found that the balance of these medications is critically important in order to control the risk of disease while still allowing the normal and healthy function of the broilers’ gastro-intestinal tract. All nutrients in the feed must pass through the wall of the gut before they enter the blood stream and are able to be used by the growing animal. The health and functionality of that gut wall is the key to nutrient delivery from the feed into the bird.

For more information on our poultry feeds, click here.