The Limiting Factors of Summer: Deer

The principle of limiting factors is that performance will be constrained by the required factor that is present in the least amount.  One good analogy is a old wooden barrel with staves of different height.  The barrel can hold only as much water as the shortest stave.  This principle works in nutrition in a similar way.  A limit of the amount of protein available to an animal will constrain the amount of muscle mass, or antlers, that can be grown.   An energy limitation can inhibit many bodily functions and development. 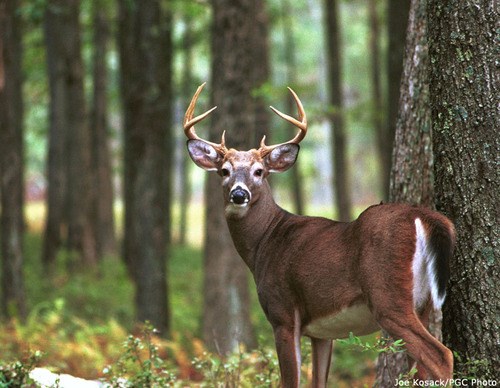 The principle of limiting factors is that performance will be constrained by the required factor that is present in the least amount.  One good analogy is a old wooden barrel with staves of different height.  The barrel can hold only as much water as the shortest stave.  This principle works in nutrition in a similar way.  A limit of the amount of protein available to an animal will constrain the amount of muscle mass, or antlers, that can be grown.   An energy limitation can inhibit many bodily functions and development.

Protein levels in forages are at their highest when plants are young and vegetative.  As the plants mature, fiber level increases to allow the plant to stand upright and compete with other plants for sunlight, and the protein level declines.

Also, the cool-season forbs and grasses that deer consumed in the spring have flowered, produced seed, and died (if they are annuals).  These cool-season forbs are the highest quality forages that deer have available each year.  Once they are gone, the overall nutritional quality of the deer diet declines because the summer forages just are of as high a quality.

This forage protein decline occurs as the protein requirements for both male and female deer increase with the summer months.  Bucks are growing antlers, which is the greatest protein requirement of a mature buck.  Does are fawning and producing milk which has a very high protein requirement.  And fawns are trying to grow and develop their organs and body parts so they can becomes a productive member of the herd.

The protein requirement for antler growth is dependent on how large of an antler mass a deer is capable of producing, or his genetic potential.  We also know that age is important in larger antler growth and this could be that as the deer reaches maturity and no longer is trying to build body organs and tissue, only maintain it, more of the protein intake can be directed toward antler growth.  Regardless, to grow antlers with a higher Boone & Crockett Score, deer need a high intake of protein in the summer, as the forage protein levels normally decline.

Similarly, as the does move into the late stages of pregnancy and eventually into lactation (milk production), their protein needs are increasing as the forage quality declines.  The amount of milk a doe can produce is directly dependent on her protein intake.  This makes the normal summer protein decline a major problem for fawn survival.

Each doe has a genetic maximum of milk she can produce each day.  However, she will only produce the amount of milk that she has the nutrients for and that is suckled from her each day.  So, a doe with just one fawn will not make as much milk as one with twins.  Also, the doe with a single fawn will not need as much protein as a doe with twins.  This single, or twin, aspect of milk production, and protein requirement, will be greatly influenced by whether you, as the wildlife manager, desires to have a high, or low level of fawn productivity.

For instance, if you lived in the Hill Country region of Texas and had a very high deer density (acres/deer), you may not want a lot of twins to survive and be incorporated in the deer herd.  Your numbers are already straining the habitat and higher reproductive rates would only make the problem worse.

However, if you lived in the Rolling Plains or High Plains, much of which has a rather low deer density and a habitat sufficient for more deer, you may want a high reproductive rate in your deer herd to increase the number of deer you can take in the future.  In this case  you would want to try to increase the protein intake of your does to help them make more milk.

Finally, the weaned fawns need a higher level of protein than mature animals (with the exception of the lactating does) because they are still building muscle and organ mass which requires protein.  Proper development of the organs of the body will help the deer to be more productive than fawns that are stressed in their first year.  Productivity in deer is a long-term management project that requires a good nutritional foundation from fawn to mature deer.

The other major limiting factor of summer is the amount of forage that is available to the deer.  As I mentioned, in spring there are generally many cool-season forbs that add both quality and quantity to the deer diet.  As the hot months of summer approach, these annuals flower and die.  And while some summer forbs do grow and contribute to the diet, they are not normally as abundant, or as high in quality, as the cool-season forbs.

Also, the browse plants put out some new growth that is reachable by deer, but as summer develops, these leaves mature and new growth slows down or stops all together.  As the months of summer proceed and deer continue to eat the browse leaves, the amount of forage available declines.  This decline, combined with a lower protein level in the leaves due to maturity, results in a compounded decline in protein intake through the summer.

So how do you try to overcome the major limiting factors of summer?  The first step should be to try to reduce the number of animals that are competing for the limited amount of forage.  If there are livestock on the ranch, some of them can be reduced, if you have control of the grazing aspects of the ranch.  Even if forb consumption is only 10% of their diet, a cow can eat as many pounds of forbs as a deer can.

The best help with increasing the amount of forage available to the deer to reduce the animal that is most competitive with a deer – another deer.  No other animal has a diet that so completely overlaps a deer as another deer.  Reducing the number of deer on your ranch, or lease, will have a dramatic effect on the amount of forage the deer have available.  Of course, if you have a small acreage that is not high fenced, decreasing deer numbers is a difficult goal because neighboring deer will come in and fill in the numbers that you removed.

Another way to increase the amount of protein intake and the quantity of forage available is with food plots.  Food plots, such as Lab Lab can provide several thousand pounds of forage per acre with around a 24 – 30% protein level.  However, these food plots need to be planted in April or May to get them up and growing in the cooler months.  Getting food plots up in the hot, dry summer months without irrigation is nearly impossible.  Also, it may be necessary to fence the deer from food plots because if forage is short, the deer will eat the seedlings in the food plot before they get enough plant vigor to survive grazing.

And finally, the most sure-fire method of increasing protein intake is through supplemental feeding.  Feeding a protein supplement can provide increased pounds in the diet as well as needed protein to allow the deer to be productive in antler growth, milk production, and body development.

If supplemental feeding is the choice that you make to overcome the limiting factors of summer, look for a feed that has both the protein needed as well as the minerals that are important in antler growth and milk production.  As was discussed in the last “Deer Camp Quarterly”, you should feed a supplement with plenty of protein in it to get as much performance as possible.

Remember deer need a certain amount (pounds or grams) of protein per day.  Percentages don’t mean anything until you know the pounds of supplement and can figure the amount of protein fed.  Also, since protein is the limiting factor, 0.10 lb./day of a 20% protein supplement will be of some help, but not as much as 0.75 to 1.0 lbs./day of supplement in improving antler growth and milk production.

Every year you face the hot, dry months of summer and your deer face the limiting factors of summer, protein and available forage deficiencies.  You can take steps to help correct these limiting factors by making more forage available and/or increasing the protein intake through supplements and raise the bar on the productivity of your deer.

Click here to browse our Wildlife Feeds and Supplements.