While most summer camps may feature the sounds of kids playing sports, or swimming; the signature sound of the Texas Brigades is marching feet, and ringing cadences

While most summer camps may feature the sounds of kids playing sports, or swimming; the signature sound of the Texas Brigades is marching feet, and ringing cadences.

Why marching? “It’s not a military thing,” assures Kent Mills, President of the North Texas Buckskin Brigade. “A major tenet of the Brigades is teaching kids leadership and how to work in a team. And the marching works, every time, to build a cohesive team. Every person has their own step, their own way of walking. But when you’re marching in a group, you have to give up a little bit of your own step, to match with the team. Everyone gives up a little something in order to make the team work.”

Kent Mills is an ruminant nutritionist with Hi-Pro Feeds in west Texas. He has been volunteering with the Rolling Plains Bobwhite Brigade, and the North Texas Buckskin Brigade since 1999.  Because of his ‘day job’ as a nutritionist, Mills work with wildlife, and the Texas Wildlife Association led him to meeting Dale Rollins, founder of the Texas Brigades. As it happened, Dale was on the lookout for some new volunteers as Covey Leaders at the Texas Brigades. 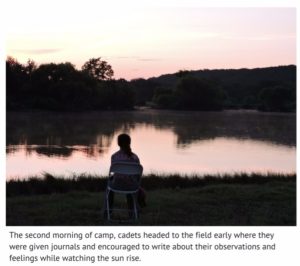 Covey Leaders are in charge of a group of 6-8 cadets, aided by an Assistant Covey Leader (accomplished cadets from the summer before). “Dale asked me if I’d like to come out, and be a Covey Leader. I didn’t really know what I was in for,” says Kent. “But my kids had left for college, and I guess I had a bit of an empty nest. Spending a week of the summer around kids sounded fun.”

What Kent discovered was a five-day gauntlet. Up at dawn to ready their room for exacting cabin inspections (inspectors have been known to name dust bunnies, and declare small pebbles as ‘safety hazards’). Then out to the field to march, before a full day of both classroom and field work. The cadets range between the ages of 13 and 17. They are taught ecosystem management, Aldo Leopold’s principles of conservation, population dynamics, anatomy, diet, and everything they need to know to become knowledgeable conservationists.

Additionally, these camps place a strong focus on public speaking.  Here, the outside-the-box thinking continues with the ‘Silver Bullets’.  Each cadet is given a famous inspirational quote. They are required to learn the quote and recite it in front of the entire camp, stating their name, hometown, and telling everyone what that quote means to them. The Silver Bullets are followed up by a ‘war cry’.  “Again, it sounds strange,” says Mills. “But it is so hard to get some of these kids to be loud. More than that, it can be really difficult to get them confident enough to not be afraid to be the only loud voice in a room. With these Silver Bullets, we get them started speaking in front of people, and the war cry pushes them to not be afraid to get loud.”

The public speaking aspect of the camp focuses on teaching the cadets to project their voice, so that they can speak in front of large groups without being reliant on a microphone. Along with their Silver Bullets, they also learn how to give power point presentations, complete with coaching on how to plant their feet, and articulate. They practice tension exercises and deep breathing techniques to calm their nerves before and during their talks. “Our goal is to turn these kids into wildlife conservation ambassadors,” says Dale Rollins, Founder of the Texas Brigades. “We want them to go out into the world, and give programs in their communities. The cadets who do the programs are rewarded with a winter hunt, opportunities to return to camp as assistant leaders or ‘special agents’, and college scholarships.”

The camp motto is ‘Tell me, I forget. Show me, I remember. Involve me, I understand’. In order for the cadets to embrace, and fully understand everything they’ve learned, they complete many hands-on assignments throughout the camp. All assignments are a competition, leading up to individual awards and a top group award. “The competitive aspect keeps them motivated,” Kent explains.

This means the days don’t end when the class and field work is done. Cadets retire to their cabins to work on writing thank you notes to camp donors, building tri-fold presentations, practicing their speeches, and developing community solutions to conservation problems for presentation to a panel of wildlife professionals.

Then they are up at dawn to do it all over again. Though it sounds intensive, volunteers say they keep coming back year after year because of the incredible growth and change the teenagers experience. 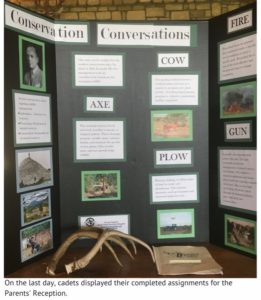 “We came and dropped our son, David off not knowing what to expect. I arrived five days later to see him marching into the awards ceremony as the cadence caller for his group. I was so impressed to see him do something like that, something he’d never done before,” says Kristi Keierleber. “The Brigades have had such an impact on both my children’s lives. After attending as cadets and they returned as assistant leaders. They were so confident in themselves, and willing to try difficult tasks.”

As a mom, Kristi was so inspired that she has been a member of the Bobwhite and Buckskin Brigades steering committees ever since, and spends five days at each camp every summer as an instructor.

There is no doubt that the Texas Brigades has had a profound impact on the lives of everyone involved. Countless volunteer hours are given all-year round to keep the Brigades going, and it is truly a labor of love. The young men and women who go through the program not only learn about wildlife conservation, but they learn that they are capable of far more than they ever imagined.

“The Brigades showed me a whole new world of things I didn’t know I could be interested in,” says Rebekah Mullen, 16, and a three-year veteran of the North Texas program and a special agent this year. “The people I’ve met here have given me a really good example of the kind of person I want to be, and the impact I want to make on other people. It changed me as a person.”

For more information on the Texas Brigades, or to find out how you or your child can become involved, visit: http://www.texasbrigades.org/ or call 1-855-TXBRIGS.