Slowing Herd Expansion on the Horizon?

As the cattle markets of North America travel along a lower road than during 2014 and the first half of 2015, with prices and profits for most operations not what they were during those high times, the marketplace is giving producers less incentive to expand the beef cow herd.

As the cattle markets of North America travel along a lower road than during 2014 and the first half of 2015, with prices and profits slowing for most operations not what they were during those high times, the marketplace is giving producers less incentive to expand the beef cow herd.

In addition to the lower prices and profitability measures, there are bits of pieces of evidence in the supply data that hint at slowing expansion.

For example, during the July through September quarter, U.S. feedlots placed 3.879 million heifers on feed, up 13% or 447,000 from what were placed during the same period a year earlier. In contrast, steer placements over the same period amounted to 6.93 million head, a much more modest increase of 1.6%. Given the numbers, it’s easy to see that heifers are accounting for a larger share of the overall increase in placements – a sign that producers are not holding back as many females for herd expansion.

In other words, the rising number of heifers headed to feedlots suggests the current expansion of the American beef herd is slowing.

This is not to say the industry is swinging from the expansion phase to a severe contraction phase of the cycle, but at least it reveals a cooling of the expansion phase. And historically it is common to see a levelling off period before actual cutbacks emerge.

Profits (or lack thereof) for cow-calf producers the next two years will be one primary determinant in whether this actually leads eventually to net herd liquidation. The process can be slow.

In turn, profits – and the prices that create or deny profits in the field and feedlot – will hinge in part on the demand side. At the moment there are signs the demand component for beef continues to be solid.

The latest USDA cold storage report revealed that total beef supplies in the nation’s freezers at the end of September amounted to 487.8 million lbs. That was down 6% from a year ago as heavy export demand continues to keep product moving out the door.

We believe it is primarily the strong demand, involving both domestic and international hunger for beef, and the willingness of consumers here and abroad to pay higher prices than five, 10 and 20 years ago – that is keeping beef prices as high as they are despite rising supplies.

High and rising prices are especially noticeable on the cattle futures charts. For their part, futures bottomed in August and have been entrenched in strong uptrends since then. 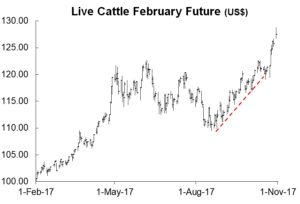 Thinking of hedging or contracting?

That means cash prices will have to do really well this winter and spring to live up to the high expectations of the futures.

We don’t see a line-up of technical signals pointing to a top as this is written, but the premium prices in futures might invite some hedging or contracting by producers interested in limiting their risk of a downturn.

Point is, cash markets could continue to work generally higher as we move into 2018 and toward the traditional springtime highs, but a lot of the potential price gains are already built in to futures prices.

Demand may be keeping up for now, and the possibility that growth in the American beef herd may be slowing, will help ease the supply side burden later on down the road.

In the meantime, potentially overly optimistic live cattle futures may be getting into high risk territory, setting up hedging or contracting opportunities.