“Now’s a great time to talk, we have our truck and trailer stuck in the mud!” Sabrina Ketcham, Professional Barrel Racer, says with a chuckle while taking a phone call from the road. A seasoned pro, Sabrina easily rolls with the latest bump in the road of her 2017 season. 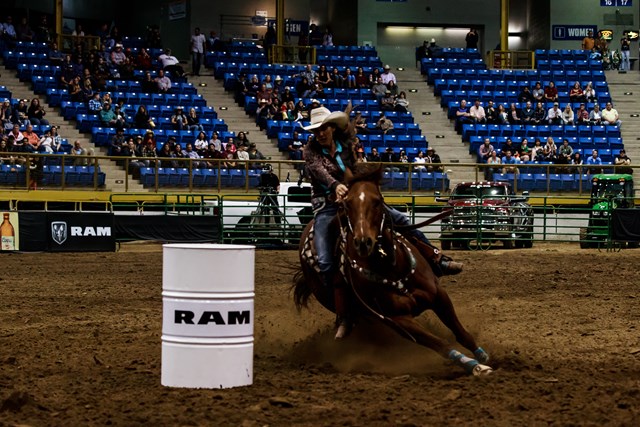 “Now’s a great time to talk, we have our truck and trailer stuck in the mud!” Sabrina Ketcham, Professional Barrel Racer, says with a chuckle while taking a phone call from the road. A seasoned pro, Sabrina easily rolls with the latest bump in the road of her 2017 season.

Born in Colorado, Sabrina has been barrel racing for most of her life. “We ranched when I was growing up. All our horses were working ranch horses, and that’s who we took to the rodeo as well,” Ketcham explains. After taking a break from rodeo during college, Sabrina returned to barrel and roping competitions when she graduated in 1995, before turning professional in 2004.

After so many years, a spirit of family and competition is what keeps Sabrina coming back year after year. “There such a thrill in doing it, in competing. That’s where my friends are. It gets to be kind of a family, the people out there every year are your friends and your support,” she says. “But, I have two young boys, a husband and a ranch to work, so being gone all year isn’t really an option. I go to the good rodeos, the ones I like.”

When she does have time to hit the road, often her husband of 13 years and two sons will join her. “When they come out on the road with me, they get to see a lot of cool places and do fun things their classmates don’t get the opportunity to do and see. It’s a great environment with good people and experiences. I like that they get to explore some of the world with me. They have learned a lot about dedication and hard work, it takes the entire family’s support and hard work to be able to win out here.” Sabrina explains. “Now that they are a little older, they have started travelling with me a little less, school and various activities have changed all our schedules.  Their dad does team roping, and my older boy has started going to the roping’s with him. It’s really neat to see my son and husband rope together.”

Over time, Sabrina has accomplished quite a lot on the rodeo circuit, including qualifying for The American multiple times, and even winning the first round of the 2016 American Semi-Finals. But for her, the experience that had the most powerful impact on her was the 2013 WNFR in Las Vegas. “It was so amazing to qualify, and to be a part of that experience, among such a great group of athletes. The experience of the NFR was really incredible.” 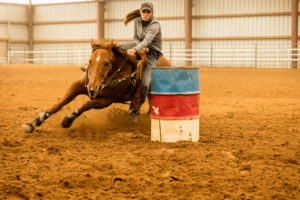 In addition to being a great barrel racer, Sabrina also trains her horses herself. “I usually buy younger colts and start training them from there, at the moment I’m also  raising a few colts,” she says. “I ride pretty much every day, the young horses get ridden every day, the older horses every other day. I work the barrels with them, but I also spend a lot of time in the country turning rocks and cactus, to make sure they understand what I’m asking them to do physically, before I ever show them a barrel.”

Her current lineup of competition horses is a diverse group. “I have an eight year old mare that I bought as a three year old, this is the third year I’ve run her. I ran her at the American, she holds the arena record at the Stockyards in Fort Worth.” Sabrina explains. “I’m hauling a five year old around this summer, and using him at the smaller fair/rodeos, to give him some experience. I’m excited about him. He’s going to be the real deal with more experience. I also have a young mare we raised that I’m hauling around, but she won’t be eligible to run until the first of December. I’m hoping to have her ready by then.”

The feed keeping her horses in top shape on the road is Alfa-Pro. Sabrina made the switch about a year and a half ago, when one of their horses got in trouble. “My son’s rope horse didn’t have any teeth because of age and we were having trouble keeping weight on him. It got bad enough I thought we were going to have to put him down,” Sabrina explains. “But our vet, Dr. Chris Morrow suggested we try him on Alfa Pro and the difference was amazing. I’ve never seen anything change as fast as that horse did on Alfa Pro. Now that’s all I feed in the trailer.”

“Hi-Pro has been great, very supportive.” She continues. “And I love the product. I’ve never had any trouble with the consistency, which is so important. Not a lot of companies have that kind of consistency, and it’s impossible to find consistent hay. It’s a complete feed, and there’s no dust, we just really like the feed. I think Alfa-Pro is a great feed for everybody, and I recommend it all the time.”

Hi-Pro Feeds is proud to support Sabrina, and look forward to watching her succeed year after year.