Around this time a year ago, we predicted better times ahead for cattle producers in 2017 - especially in the wake of the painful declines through 2015 and most of 2016. 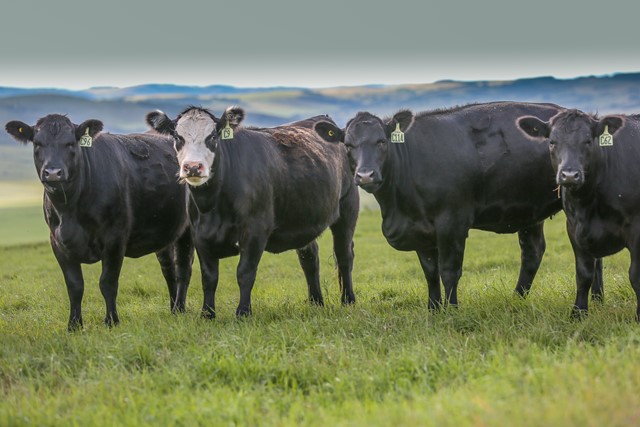 Around this time a year ago, we predicted better times ahead for cattle producers in 2017 – especially in the wake of the painful declines through 2015 and most of 2016.

And as the table here shows, cattle prices are indeed finishing up the year higher than where they started. Of course, markets still remain far below their 2014 peaks but no one was expecting another repeat of those boom times. Indeed, it may be decades before such highs are revisited again. 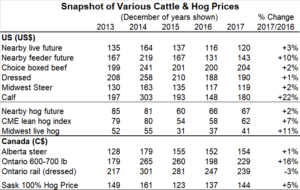 But regardless of how modest this year’s gains may have been in comparison to previous years, it is perhaps remarkable that prices moved higher at all, given the upward trend in overall meat production. Suppose you were looking ahead at 2017. And suppose you knew US red meat production would be up about 4% from a year earlier. Would you have thought prices would be up? Probably not.

After all, one of the basic tenants of supply and demand dictates that when supplies are plentiful, prices are typically lower. But thanks to strong demand, here we are anyway.

So, with beef and other meat supplies still trending higher, it remains incumbent on demand to remain strong enough in the New Year to continue to carry the mail.

On the export front, the outlook seems promising enough. The latest numbers released earlier this month by the USDA put American beef exports for October at 111,287 tonnes, up 5% from the same month last year. For January through October, exports totaled 1.038 million tonnes, up 9% year-over-year.

Although shipments to Japan have led the way so far this year, it is important to note that 2018 will represent the first full year of U.S. beef access to China after a 14-year hiatus. Since the mid-June market reopening, U.S. beef exports to China have totaled a modest 1,570 tonnes, valued at US$17.2 million. However, the U.S. Meat Export Federation still maintains the Chinese market holds “exciting potential.”

Meanwhile, with the 2008 recession getting further and further in the rearview mirror, U.S. economic indicators are generally positive. On Dec. 21, the (U.S.) Conference Board reported that its leading economic index climbed by a larger-than-expected 0.4% in November, after jumping by 1.2% in October. The numbers suggest “solid economic growth” will continue into early 2018, putting consumers in a good place to continue their beef buying ways.

Solid domestic demand for red meat (reflected by the ability to consume more at steady to higher prices) is helping to support prices. A solid U.S. export pace is helping too.

Can this continue in 2018? It might, but people in the livestock business are advised to proceed with a full awareness that the production trend remains up. Any hiccup in demand could be devastating.