When 17-year-old Riley Greiten says she got started showing early, she means early. At the young age of 6 years, Riley was out in the show barn with her big brother, then 8, learning the nuts and bolts of raising a show animal. 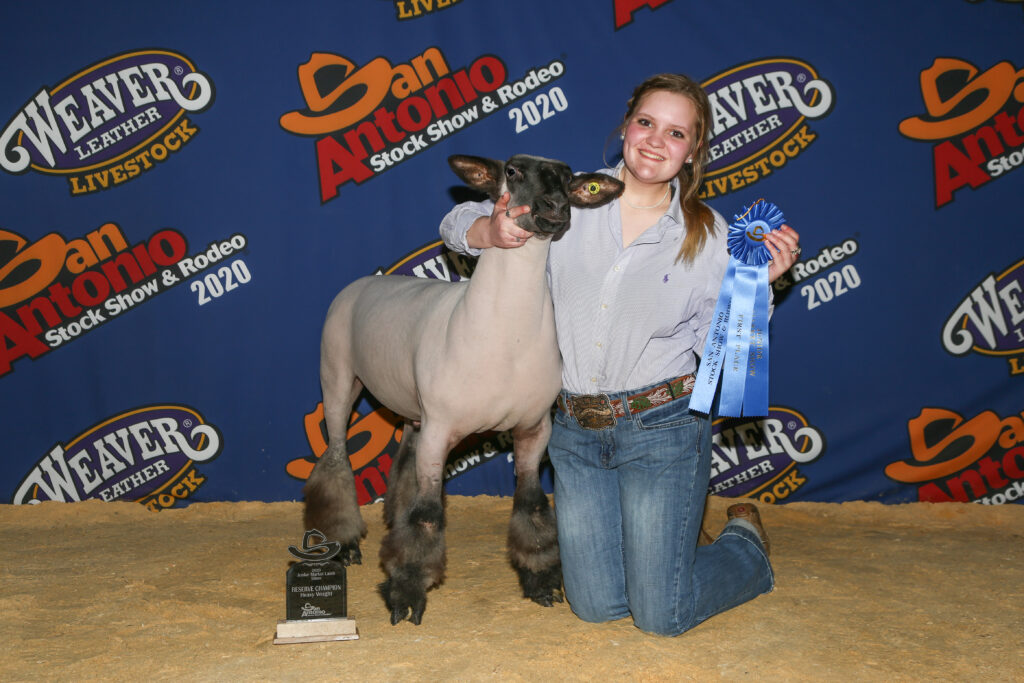 When 17-year-old Riley Greiten says she got started showing early, she means early. At the young age of 6 years, Riley was out in the show barn with her big brother, then 8, learning the nuts and bolts of raising a show animal. “I loved being in the barn with him.” She says “He let me get my hands into every aspect, and was my inspiration for starting to show my own animals.” This partnership has continued into their teens. “I take showing more seriously than he does, but I wouldn’t be as far as I am today in our ag chapter and with showing if it wasn’t for him. He was president for two years and now I’m president, too. He gets a lot of credit. We may fight a lot, but I’m really blessed to have him in my life.”

Riley, who lives in Midlothian, TX with her mom and dad, also says her parents never expected their kids to be so ag focused. Both parents grew up in California, and although her dad showed sheep, it wasn’t as serious an undertaking as it is for his kids. However, all those years ago following her big brother around the barn instilled in Riley a strong passion for ag. “I am a chapter officer and I am on a show team for Texas, Oklahoma, and Arkansas. It’s 25 kids that represent NRS and we show for them. Last year I was an agriculture ambassador for my county, we travelled all over advocating for ag and teaching kids in the community about it.” Riley laughs “I do so much with my ag chapter that’s pretty much all I do.”

In spite of starting early, it took Riley a few tries to find just the right kind of animal. “Well, my brother showed pigs, but I thought they were disgusting, and I didn’t like dealing with goats, either.” She explains “But then, I just clicked with sheep. I really enjoyed the three sheep I had the first year, and I had seven by the next year. Other kids in my chapter were showing sheep, so they were able to help teach me.”

Riley’s love of growing sheep has led to a herd of a dozen show animals that she cares for meticulously. “We have a great ag barn at school and that’s where I keep my animals. I wake up at 5:30am and go to the barn. In the mornings I just feed so I can get to school. I get to school at 8:39am, my day ends at 1pm, and all my end of day classes are in the barn. I work them, put them on the walker, practice setting them up and walking them around like in the show ring.”

However, Riley says the challenge isn’t just in time management. “Every day is something different because you can never really get there and have it be perfect. Every day is different, so you work with the challenges of each day. I’m up there from 1pm to 6:30pm or so. It takes time because I have so many.”

This intense routine also includes a top-notch nutrition program. “I’ve been using Hi-Pro since the 7th grade or so.” She explains “It’s a very good all-around feed it hits every point you need a show feed to hit. I’ve never had an animal not eat it. It can be hard to get every animal to eat, sometimes they just aren’t hungry, but I’ve never had an animal turn away from the Hi-Pro Show Feeds. That’s a hard thing to accomplish.”

This intensive program has a winning record, most recently Reserve Grand Champion at the RRV Fair Back-to-School Classic. However, the time and care Riley takes pays off in more ways than just winning. “My favorite part is probably all the friends and new family members I’ve made. I’ve known some of the kids I still show with since I was 8, Being able to travel all over and meeting people who are all interested in the same thing you’re interested in. I have some distance friends who are coming to my graduation. Making those connections is unique to agriculture compared to other sports.”

Considering how much time and passion Riley pours into her sheep, she finds the losses to be the most challenging. “Having my sheep for so long, working with them, feeding them, taking care of them…when you don’t do well at a show it’s a big let-down.” she says “It’s a sport for people who are really determined, because you’ve really got to keep going even after you don’t win. That’s the hardest part, working so hard and not having the best outcome. It’s hard to stay determined and stay on top of your work.”

Riley continues, “If I have one piece of advice for future livestock show kids, it’s even if you don’t ever do well showing, you want to make sure you’re doing it because you’re enjoying it and having fun. I know a lot of people can get carried away with wanting to win, win, win, but you have to make sure you’re having fun. Now that I’m a senior and this is my last year, it’s really important to me that I’m having a good time.”

As for her future, Riley has no plans to leave ag behind. “Next year I’m going to Texas Tech and I’m majoring in Ag Communications. I am excited to see where that takes me. I I’m hoping to get a job that allows me to stay really involved in ag.”

Hi-Pro Feeds wishes Riley the best of luck in her future. If you’d like to know more about our Show Feeds, click here.