More Confirmation of Heavier Cattle Supplies than a Year Ago

They might be a tad more cautious than their U.S. counterparts, but Canadian cattlemen are beginning to expand their herds as well – further confirming the trend toward heavier North American cattle supplies. 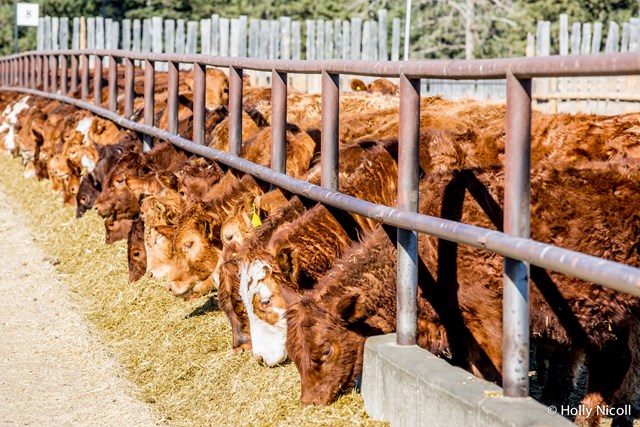 They might be a tad more cautious than their U.S. counterparts, but Canadian cattlemen are beginning to expand their herds as well – further confirming the trend toward heavier North American cattle supplies.

A Statistics Canada cattle inventory report released Aug. 18 pegged the total number of cattle (beef and dairy) on Canadian farms as of July 1, 2016 at 13.2 million, up 1.3% from the same date a year earlier and the first year-over-year increase in the July inventory since 2012. It’s a small increase to be sure, but one that still tops the 0.3% hike in Jan. 1 cattle numbers that StatsCan reported earlier this year.

Where the real indication of Canadian expansion shines through, however, is in the breeding herd. StatsCan pegged the total number of beef heifers held for breeding as of July 1 at just shy of 642,000 head, a relatively sharp 4.5% increase from a year ago, and one that follows on the heels of the 4% upturn in the breeding herd that was noted back on Jan. 1 of this year.

Meanwhile, the July 1 inventory of Canadian calves was up 3.9% from a year earlier to 4.3 million – the first year-over-year increase since July 2005.

To provide some perspective, the Canadian cattle herd still remains small compared to the past few decades, as shown on the chart below. Total cattle numbers as of July 1 were 21.8% below the peak of July 2005, when the discovery of a BSE-infected cow on an Alberta farm a couple of years earlier closed international borders to Canadian cattle and beef and kept more animals at home instead. But even before the BSE crisis – through the late 1990s and early 2000s – total Canadian cattle numbers were still well above current levels, routinely ranging from between 14 million and 15 million head.

It is also worth noting the number of Canadian beef cows, at 3.81 million head as of July 1, was up just 0.3% from the previous year and remains about 30% below the levels seen just a decade or so ago. 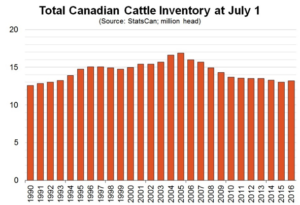 A similar situation is seen south of the border, although the expansion there has been much more significant the past two years. In January, the USDA estimated the American cattle herd at 92 million head, a 3% increase from the previous year and the largest since 2011. Beef replacement heifers, at 6.29 million head, were up 3% from a year earlier. But after years of dwindling numbers, mainly caused by incessant drought on the southern Plains that caused huge liquidations in the big cattle states of Texas, Oklahoma and Kansas, U.S. cattle numbers also remain well below normal.

(The USDA did not update U.S. cattle numbers in July due to government budget cuts.) 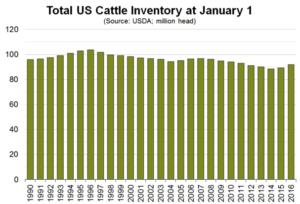 As most producers will know, it was largely the drought-induced declines in the bellwether U.S. cattle herd that set the stage for the record prices that producers on both sides of the border enjoyed through most of 2015. But as producers will also understand, high prices are the cure for high prices, meaning ranchers will inevitably respond to good profits by holding back more breeding stock in order to producer more cattle to sell. We’re seeing that very dynamic now.

Indeed, the total U.S. cattle slaughter is currently running about 4% above the previous year, while large supplies of relatively cheaper pork and chicken provide heavy competition to beef in the grocery store meat case. Total beef supplies in U.S. cold storage at the end of June amounted to 451.2 million lbs, almost 2% higher than the five-year average.

Back to the Canadian side, one of the wettest summers on record in Canada’s west in 2016 is an incentive for more expansion of the beef herd, due to ample feed supplies.