Of all of the minerals we work with in livestock production, selenium has the narrowest tolerance between deficiency and toxicity. And when you add that we know very little about the actual amount of selenium in most of the forages and browse that our animals eat, it sometimes looks like we’re playing Russian Roulette when we add it to our feeds. 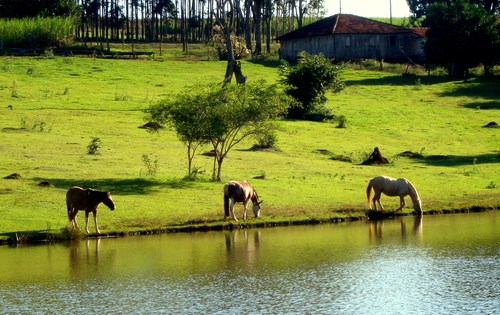 Of all of the minerals we work with in livestock production, selenium has the narrowest tolerance between deficiency and toxicity.  And when you add that we know very little about the actual amount in most of the forages and browse that our animals eat, it sometimes looks like we’re playing Russian Roulette when we add it to our feeds.

We do know some areas of the U.S. that are selenium deficient.  Most of the northeastern and northwestern states have severe deficiencies and supplementation is mandatory.  We also know that in some areas, such as the western states, there is enough selenium in the soils that producers occasionally see symptoms of selenium toxicity.

Do you know what the level is in your forages?  Probably not.  However, if it was on either of the extreme ends of deficient or abundant, you would know it.  You would have had experiences with livestock eating either too much, or too little, selenium.  And you would have had livestock losses from these conditions.

Selenium acts alone, and in conjunction with Vitamin E, to prevent compounds in the body from destroying cell membranes.  It also is involved in making the hormone thyroxine active which helps regulate the body temperature, metabolism, reproduction, circulation , and muscle function.  The dairy industry has found that retained placentas can nearly be eliminated with combinations of vitamin E and selenium.  So you can see that even though the amount that is in the body is very small, its effect is great.

Selenium toxicity can occur if a ruminant eats as little as 3 milligrams per kilogram of body weight (1.36 mgs/lb.).  Acute toxicity is generally realized by finding a dead animal, but some of the symptoms are dilated pupils, pale and blue mucous membranes, bloating and abdominal pain, elevated temperature, and labored respiration.  Acute toxicity is caused by livestock ingesting a high dose, and there is no known treatment to reverse the process.

Chronic toxicity is the more common syndrome livestock producers see.  It is characterized by the “blind staggers” – livestock wandering and stumbling over objects because of visual impairment, weakness in the forelegs, and finally blindness and paralysis of the tongue and swallowing mechanisms.  These symptoms may take two to three weeks to manifest themselves, but when the paralysis of the tongue occurs, death will follow in a few hours.

As I said, you would know it if your area had excess selenium.  Deficiencies are a little different, though.  The most characteristic symptom of selenium deficiency is White Muscle Disease (WMD) in young animals.  This is characterized by degeneration of the skeletal muscles.  Animals with WMD will appear stiff, and “humped up” when they walk.  If you do a necropsy of the animal, you will see white muscle mixed in with the normal red muscle tissue.  Generally these animals die either at birth, or within a few months of birth.

Okay, are you sufficiently frightened, yet?  Don’t be.  As I said, if you are in a known deficient or toxic part of the country, you would know it.  You would see the effects of it, and all of the more experienced producers and veterinarians would talk about it.  And salesmen would be visiting you with some of the injectable forms of selenium.

In areas where toxicity shows up, it will be greater in certain plants that have the ability to absorb more selenium into their system.  Managing your grazing pattern to stay away from those plants, or controlling them with herbicides, may be your only way to fight it.  Where there are deficiencies, it is much easier, you will have to include the mineral in your feeds or mineral supplements to the maximum allowed, which is 3 milligrams per head per day.  This is the limit set by the U. S. Food and Drug Administration.

For those of you in the areas in between, which I think is most livestock operators, supplementing is trickier.  The best solution is to have a selenium analysis done on a forage sample.  Be prepared, it is expensive.  Normal costs for selenium analysis alone can be as much as $75.00 per sample and not every forage lab will do a selenium analysis.  You wouldn’t want to do a dozen or so of these.

After you have a base line of selenium in the forage to work with, then you can have a better idea of how much selenium should be included in the diet, if any.  If you need to supplement with selenium, sodium selenite and sodium selenate are both approved as inorganic sources.  An organic selenium (selenomithionine) from yeast is also available, but at a much higher cost than the inorganic sources.  The organic selenium source may be worth the extra cost, if you are having definite selenium related problems such as poor responses to vaccines.  Check for a selenium source on your supplement labels.  In Texas labels for beef cattle mineral supplements, all dairy feeds, all horse feeds that contain added minerals, and sheep and goat feeds must list the level of selenium.  Use this to determine the amount of selenium your livestock are ingesting each day.

Just make sure the total intake from supplements does not rise above the 3 milligrams per head per day maximum, and your risk of toxicity and deficiency will be reduced.  For example, if your mineral supplement has 15 parts per million (ppm) of selenium in it, that translates to 6.80 milligrams per pound.  If your livestock eat 0.25 lb./day of the supplement, they will ingest 1.70 milligrams of selenium per day.  That’s well below the maximum.

One caution, the maximum was really set up for dairy cattle, so trying to get 3 milligrams per day into smaller animals like sheep and goats may be dangerous.  Probably staying under 1 milligram per day for them would be safer, unless you know you have a potential for selenium deficiencies.

Selenium is a very necessary, yet dangerous, mineral for your livestock.  Use it wisely, and not indiscriminately.  The more you know about the selenium status of your forages and your supplements, the less likely you are to be a victim of it.