Probably the most overlooked, but most frequently used mineral for our livestock is salt, chemically known as sodium chloride. Everyone knows that livestock need salt, but how much do they need, and how do you use this requirement to your advantage? 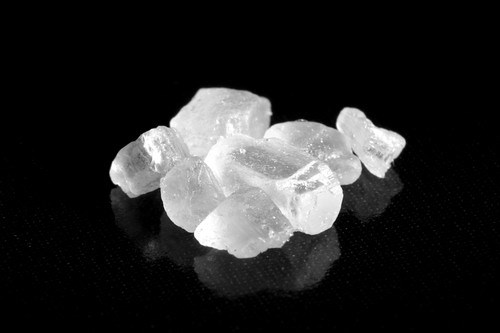 Probably the most overlooked, but most frequently used mineral for our livestock is salt, chemically known as sodium chloride.  Everyone knows that livestock need it, but how much do they need, and how do you use this requirement to your advantage?

According to the National Research Council, the requirement for salt is 0.6 to 0.8% of the total diet of most livestock.  A lactating cow requires 0.10% of her diet as salt and lactating sheep and goats need 0.18%.  For a 90 pound lactating nanny goat, eating 4.5 pounds per day, 0.13 ounce per day would fulfill her daily need.  That’s not very much.

However, salt is very important in bodily functions.  One of the primary functions is to maintain the proper balance of water in the cells of the body.  Minor deficiencies in sodium are hardly noticeable, but larger and longer deficiencies can result in reduced feed intake, growth, and milk production.  For chlorine, the books say that the requirements, deficiencies, and toxicities for chlorine are not well defined in livestock.

Most livestock producers also know from experience that this mineral can be used as a limiter of feeds.  The theory is that an animal will eat just so much, then will stop eating the salt-limited feed. Sometimes this works, and sometimes it doesn’t.  The main reason that it doesn’t is that most animals can tolerate very high levels.  Researchers have fed as much as 6.5% of the total diet without any toxic effects.

Also, if an animal eats the salt-limited feed to the point that they can tolerate no more salt, they can go get a drink, and the intolerance is overcome.  I have personally seen during a drought time when someone was just trying to “hold” some calves until it rained, calves eat twelve pounds per day of a feed with 20% salt in it.  That’s around 2.4 pounds of salt a day.  They didn’t do too well, but it didn’t kill them.

Salt can be used as a limiter in feeds if you follow two principles.  One is that you try to limit them near the amount of feed they need.  If an animal on pasture needs 2 pounds of a feed to get the protein, energy, and minerals it needs each day, and you try to limit it to one pound, you won’t be successful at limiting the intake.

This is the problem with most limit feed situations.  Taking a forage sample, and estimating the amount of deficient nutrients will help to determine how much supplement livestock will need.  Add salt to limit them to that level, and you can be successful.

The second principle in limiting with salt is to not put the feed near a water source.  It’s true that the livestock will get their fill of salt and quit eating.  However, if they can go to the water point and drink their fill of water, they can come right back to eat more of the feed.  If you put the feed a good distance from water, 1/4 to 1/2 mile if possible, the distance will help to limit their intake since walking to water will take more time, and they will probably graze between the feed and the water, if grazing is available.

Sources of salt are of concern as well.  While salt is salt, seldom is it fed alone.  The trace mineral and sulfur salt blocks used by so many producers are a good idea, but not a very good practice.  The trace mineral blocks are made to be cheap and mostly made of the oxide forms of zinc, copper, iron, manganese, etc. which are not very available to the livestock.

The same is true of the sulfur blocks.  For one thing, there is only 3% sulfur in the block and it’s in the form of elemental sulfur, which is very poorly available to a ruminant.  If you want to put it out for a salt source, that’s fine, but don’t expect too much help for sulfur deficiencies from it.

Some producers claim that the sulfur salt blocks will keep ticks and lice off of livestock.  I have asked every parisitologist that I have met, and they all laugh at this concept.  I can’t say personally whether it works or not, but I do doubt it.

Salt is important, and we have a lot of latitude in using it for livestock.  You can use it to draw animals to feed, to limit their intake of the feed, and to provide the sodium and chloride they need.  Just use it wisely, and judiciously, to help the animals get and utilize the nutrients they need.