For those of you that graze improved pastures, or have reseeded native pastures to grasses that are supposed to improve growth, are you getting the production you think you should?  Maybe your soils are not up to producing the quantity and quality of forages you need for your production goals. 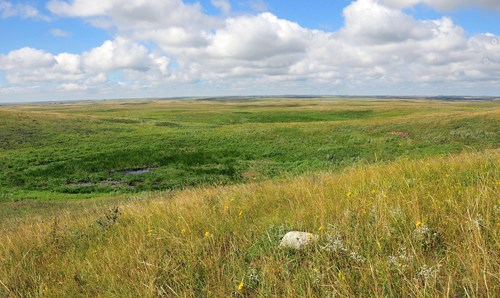 For those of you that graze improved pastures, or have reseeded native pastures to grasses that are supposed to improve growth, are you getting the production you think you should?  Maybe your soils are not up to producing the quantity and quality of forages you need for your production goals.

For cultivated or non-native grass pastures, forage production is limited by the nutrients in the soil and the amount of moisture available for plant growth.  Something that is interesting and less known is that the quality of the forage is also influenced by the amount of soil nutrients available.

When you turn over new ground and plant a new crop, whether it is an annual or a perennial, you release some soil nutrients that plants were unable to reach.  The result is the phenomenal growth you see in the first year.  However, in subsequent years, the production levels will decline and many of the desired plants may begin to disappear.

The reason for this disappearance is that the plants are using the soil nutrients faster than they are being replaced by manure and organic matter decomposition.  The field or pasture that you were so proud of initially becomes an eyesore in a few years full of annual forbs that in this case would be called weeds.

Fertilizer comes to the rescue.  If you can maintain the level of soil nutrients, and maintain the amount of moisture available to the plants, you can sustain that extra growth that you received in your first year of production.

The first step in maintaining this production level is to take a soil sample.  You do this by taking small amounts of soil from varying depths of 2 to 12 inches in depth and having them analyzed by a soils lab.  When you send in the soil sample, you should include information about how much forage production you normally expect from these soils.  The lab will then make recommendations about how much fertilizer you need.

Now this may be old hat to some of you, but how valuable is this fertilizer to your livestock?  First off, there is a “general” concept that for each pound of Nitrogen you add, there will be an increase of 30 pounds of forage.  If you added 100 pounds of 32-0-0 fertilizer per acre, that would be 32 pounds of nitrogen per acre.  You should expect around 960 pounds per acre of increased forage production.

How valuable is 960 pounds of increased forage production?  Well, if you are running 500 pound calves on it, and we assume they are going to eat about 14 pounds of dry matter forage per day, you could run an extra calf for 68 days for each acre you allocate to it.  If this calf is gaining just 1.0 pound per day and the gain was worth $0.80 per pound that would mean an income increase of $54.40 per acre.  The cost of the fertilizer will probably be around $12.00 per acre.

Pretty impressive, huh?  But there are some caveats to this.  No matter how much fertilizer you put on a field, the moisture you receive will be the greatest limiting factor.  If you get into a dry year, you will get much less forage production from the fertilizer.  Another limiting factor is the level and availability of the other nutrients in the soil that are needed by the plants.

Jeff Ball, with the Noble Foundation in Ardmore, Oklahoma, wrote in their newsletter, “Ag News and Views”, that Bermuda grass takes up soil nutrients in a ratio of 4:1:2.  That’s 4 parts nitrogen: 1 part phosphorus: 2 parts potassium.  If  you supply more enough nitrogen that the production potential exceeds the amount of potassium required, the lack of potassium will restrict growth.  This makes the soil analysis you took, hopefully, more important in determining not only how much, but what type of fertilizer to apply to your pastures.

Getting the improved forage production from fertilization is great, but there are benefits even beyond that.  Fertilization can also increase the nutrient quality of the forages in your pastures, if soil nutrients have been limiting.

I have seen this for several years with summer forages, such as the old world bluestems, Klein grass, Bermuda grasses and the hybrid forage sorghums.  Maybe you have had experiences where your livestock just didn’t gain, or perform as well as you felt they should in all of that forage.

Most the time the reason for the poor performance was that if nitrogen is limiting total forage production, you can bet it’s also keeping the protein level of the forage down, too.  This is very important if you are grazing livestock that need higher levels of protein such as young, growing, or lactating livestock.

Especially with these classes of livestock, a lack of protein is many times the first limiting factor in production.  Muscle tissue must have the amino acids from protein, and each milk molecule is built around a protein complex, so each of these are directly limited by the amount of protein intake the livestock have.

But even more than protein improvements from fertilization, the energy value of the forage, based on the amount of indigestible fiber, is improved by fertilization.  I’m not completely sure why this happens, but I’ve sampled too many forages to not believe it when I see it.  This improvement in digestibility carries over into winter dormant forages as well.

So, fertilizing your pastures will improve the protein content of the forages and improve the energy value, both of which are necessary form improved performance.  By improving the nutritional quality of your pastures you can get more pounds of livestock produced, and do it with less, or no, supplemental feed.

One final note, fertilizing doesn’t work too well with native forages.  They just don’t give an economical response.  If you think about it, the reason they are there in the first place is because those meet their soil nutrient requirements naturally in the soil.  They haven’t been selected for more growth potential like the introduced forages are.  So, unless your pasture soils have extremely low nutrient levels, fertilizing native pasture forages probably won’t make you money.

Invest your money where it will make money.  Get a soil sample and fertilize those forages that have the ability to respond with greater amounts of forage and improved nutrient quality.  Your livestock and your wallet will grow better.