Earlier this month, long-time Comanche, TX resident Doyle Hightower celebrated a momentous anniversary alongside family and co-workers. Doyle Hightower has been an employee of Hi-Pro Feeds for fifty years this month, the entire life of the company itself. 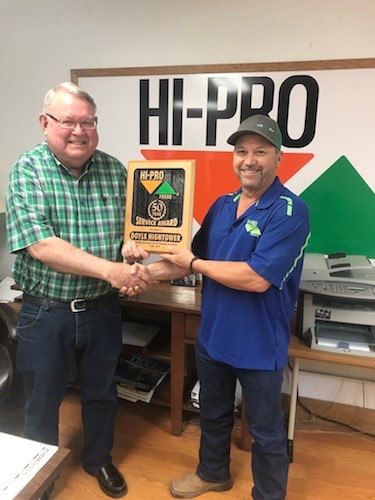 Earlier this month, long-time Comanche, TX resident Doyle Hightower celebrated a momentous anniversary alongside family and co-workers. Doyle Hightower has been an employee of Hi-Pro Feeds for fifty years this month, the entire life of the company itself.

Mr. Hightower was raised on a dairy farm in the Comanche area. He attended Tarleton State University, and earned his Bachelor’s of Science in Agriculture. His first job out of college was in dairy management with Gore Bros. (later Hi-Pro Feeds), eventually moving into embryo transfer. Later, he occupied the procurement desk in the feed mill before transferring to the formulation desk 20 years ago.

Jennifer Olenick, his co-worker in formulation for the past four years, has learned an incredible amount from Mr. Hightower during their time together. “He is a great mentor and co-worker,” said Olenick. “I’ve been working with him for four years and it’s been an incredible journey. I’ve learned so much from him. We love him and it’s indescribable how lucky we are to work with Doyle.

Brooke DeWinne, another formulator, agrees. “He’s worked in so many different facets of the industry, and he’s so incredibly knowledgeable, but he’s also one of the most humble, down-to-earth people you’ll ever meet. You can truly go to him with anything, he never makes anyone feel like their question is stupid or unnecessary. I’ve learned so much from him.”

When asked how the company has changed over half a century, Doyle says not that much. The most notable changes, Mr. Hightower mentions, have been the introduction of computers. Over the years there has been a constant stream of new devices and software to help in the work of formulating quality feeds. “Everyone in the office helps each other out in learning and training with the new software. Of course, the younger ones still run in circles around me,” he says, chuckling.

Additionally, according to Doyle, the rewards of the job haven’t changed much. “I appreciate gaining the trust of the nutritionists. It’s very satisfying when you can get a formulation done correctly, with all the right ingredients, and approved by the nutritionist.”

A family man, Mr. Hightower raised two children with his wife, and now has grandkids ranging from 11 to 21 years old. “Working for Hi-Pro has allowed me to live in a smaller town,” said Doyle. “My kids grew up and graduated here. It was great to keep them in one place. I like to visit big towns once in a while, but the small-town Comanche life is for me.”

Hi-Pro Feeds is proud to have people like Doyle Hightower as a part of our family, working tirelessly over the years to ensure quality feeds and great customer service.