Livestock showing is often a family affair, with former showers passing down their experience to their children and grandchildren for generations. For Kristen Massingill, however, she and her sister are the first generation to show. 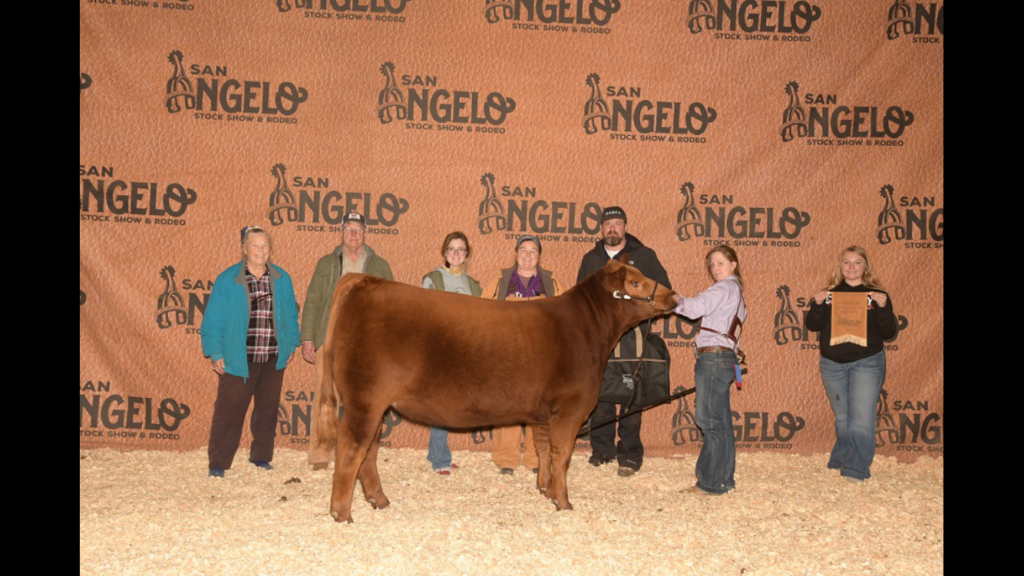 Livestock showing is often a family affair, with former showers passing down their experience to their children and grandchildren for generations. For Kristen Massingill, however, she and her sister are the first generation to show. “I was so little when I started showing calves, my dad helped me halter break. My sister wasn’t quite as into it as I was, so it was really my dad and I working together and figuring things out. Over the years, it’s really become a team effort with the whole family.”

Kristen Massingill’s mom is a former Home Economics Extension Agent, and her father works for TXDot at Hamilton County. Neither had any experience showing beef cattle. “When I was in the 4th grade I had the idea to show calves.” Kristen says “My cousin in San Antonio shows, so we traded a steer and a pig for two heifers from my uncle.”

Being a total beginner, Kristen remembers the challenges “Needless to say the first ones weren’t that great, but we made the best of it. I had some success at small jackpots. My first major show was San Antonio and I was dead last. I really didn’t like not winning, but I took to my heifer, so I stuck with it and tried again the next year.”

The Massingill’s got in touch with a Hamilton County breeder who uses AI, and bred a heifer from a 2011 champion bull. “That breeding moved us a couple spots in class. That March, though, was when we bred the heifer that got me into my own breeding program. She got third in San Antonio.”

As much as Kristen took to winning, she found herself fascinated by genetics. Observing the breeding process as a buyer made her want to learn more about what traits are best and how they can be engineered through breeding. She got involved in Livestock Judging to learn more and quickly started her own small breeding program before she was even in middle school.

“The breeding program we have now is something fun and interesting and I enjoy it. I have a pretty successful herd considering how young I was when I started.” She explains. Those successes include winning her division at nationals in Nebraska in 2015, as well as their division of Fort Worth with a cow/calf pair. A descendant of that winning cow won last year’s Overall Reserve Champion Bull – Bred and Owned at the State Fair of Texas.

Over the years, Kristen has learned that there is more than just genetics to a winning herd. “Our first feed was disappointing. Our calves just weren’t gaining like they needed to, and their hair was kind of flat. They really weren’t living up to their genetic potential.” She says “In 2014 we made the switch to Hi-Pro and have had a lot of success with it. The year we switched we won reserve in San Antonio. That heifer was named Karma, and she loved eating that feed. Her hair looked great. Even when we switched from Starter to Finisher, it was consistent and the quality stayed no matter where we got it from.”

Kristen is now in college at Conner State College in Warner, OK. For now, she is focused on her school work, but her passion for ag and livestock showing hasn’t left her. “I always really loved working with the babies, the calves. Everything is new for them and I liked waiting patiently for it all to click and for them to get comfortable. I also love getting younger kids that are excited like I was involved. I love to teach and to watch the kids grow with the livestock.”

Kristen Massingill and her family have a lot to be proud of in their journey from raw beginners to experienced breeders of winning show animals. Hi-Pro Feeds is proud to support successful programs and hard-working youth.

For more information on our show feeds, click here.