Market prices have plenty to say about when ranchers expand their cattle herds but so too does Mother Nature. And over the past couple of years, Mother Nature has given the go-ahead; supplying the southern U.S. Plains with enough moisture to bolster the pastures that are the lifeblood of the American beef production machine. 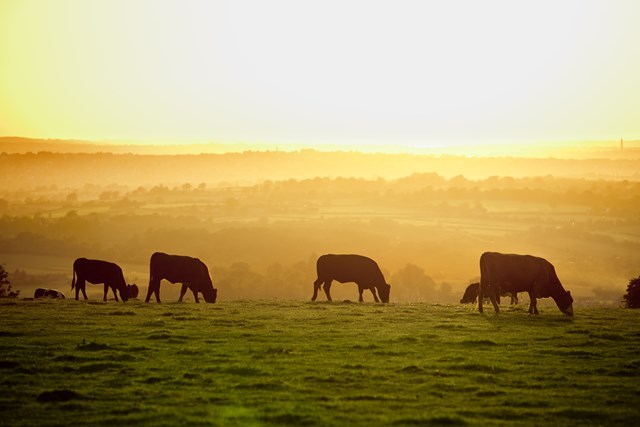 Market prices have plenty to say about when ranchers expand their cattle herds but so too does Mother Nature.

And over the past couple of years, Mother Nature has given the go-ahead; supplying the southern U.S. Plains with enough moisture to bolster the pastures that are the lifeblood of the American beef production machine.

In the cattle markets, what’s happening in the present day can sometimes offer insight into the look of the landscape a year or two later. Current weather conditions in much of the rangelands and hay production areas of Canada and the US are pointing toward an increasing number of cattle dotting the landscape.

Indeed, the latest USDA crop progress report pegged nationwide pasture conditions as of June 5 at 66% good to excellent, up 3 points from a year earlier and well above the 10-year average of about 53% good to excellent.

Further, drought was affecting just 10% of the U.S. cattle inventory as of the end of May, down from the most recent high of 19% on April 12.

As cattle producers are no doubt aware, that’s a huge improvement from 2010-12 when severe drought on the southern Plains burned up pastures and helped to force massive herd liquidation in the big cattle states of Texas, Oklahoma, Kansas and Nebraska. In fact, things got so bad that late spring pasture conditions in Texas in 2011 dropped as low as just 9% good to excellent, with almost 75% rated poor to very poor.

Given those crooked numbers, it’s no wonder producers had to send their cattle to town, culminating in the American herd dwindling to just 87.7 million head by the end of 2013 – its lowest level since 1951. The drought was a primary reason Texas lost as much as 25% of its beef cow inventory, while Oklahoma beef cow numbers dropped around 12%.

Of course that reduction in the American herd led the big bull market in 2014-15, that is also now helping to sow the seeds for the increase in beef production that we are seeing today. The latest USDA cattle inventory report pegged the total number of cattle and calves in the U.S. as of Jan., 2016 at 92 million head, up 3% from a year earlier and almost 5% above the 62-year low notched just a few years back.

With the added benefit of the improvement in pasture conditions, Kansas and Oklahoma led the way in herd expansion this past year. In fact, 38 states reported higher cattle numbers as of Jan. 1, 2016 compared to a year earlier, while only three saw decreases.

California, home to more than 5 million cattle and typically holding the fourth largest state herd, was in the grip of severe drought but even that has eased a little following the winter El Nino credited with bringing the Golden State much needed rain and mountain snow. Jan. 1 cattle numbers in the state were up 2% to 5.2 million.

Clearly, US producers are taking the herd expansion ball and running with it. 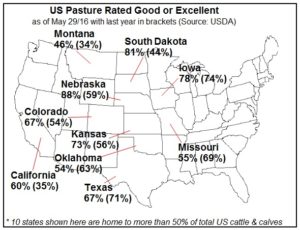 In Western Canada, the pasture situation is improving as well. Portions of the Prairies, including southern Alberta and Saskatchewan, were unusually dry right through last fall, the winter and into this spring, which crimped feed supplies. However, rain over the past few weeks has helped turn things around.

“The rain has been a huge help,” Alberta forage specialist Karin Lindquist said last week. “There are still some areas that could use a bit more, but so far so good. Knock on wood.”

Although beef heifer placements into Canadian feedlots were up sharply in March compared to a year earlier – suggesting that Canadian producers still are not expanding their herds, regardless of the gains in the US – it would seem likely that improving pasture and feed supplies will eventually lessen the liquidation of females on this side of the border.

Longer-term, the prospects for continued herd expansion in the benchmark U.S. market appear positive. Weather outlooks suggest continued good moisture for the southern Plains through the month of June, with pasture conditions likely to hold above average through the summer and into the fall.

Meanwhile, the USDA is expecting cattle producers to keep pushing forward with expansion as well. According to projections released by the USDA’s Economic Research Service earlier this year, American cattle numbers will increase significantly over the next decade, increasing by 7.6 million head to more than 97.4 million by 2025.

Of course, nothing in nature or in markets moves in a long-term straight line. The expansion will vary from year to year, with both profitability and weather conditions factoring into the outcome.

What’s clear is that although the profitability incentive has been washed away after the boom of 2014, for its part the weather-related incentive for herd expansion is solidly in place.