Herd Data and Trade Uncertainty for Beef Markets: Do You Have a what-if Plan?

There’s little doubt the deep market losses experienced through most of 2016 stung many North American cattle producers, but any slowdown in cattle production at this point is likely to be minimal. 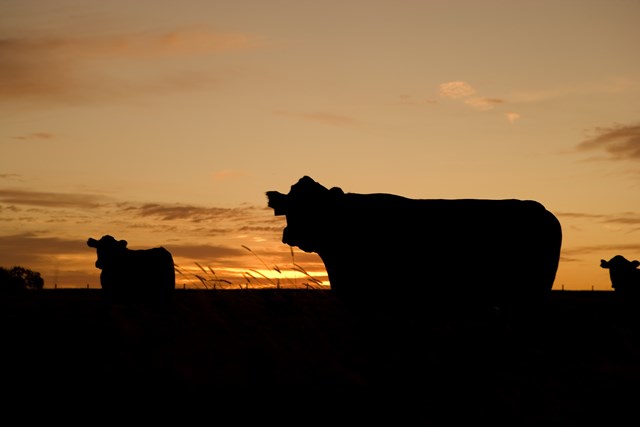 There’s little doubt the deep market losses experienced through most of 2016 stung many North American cattle producers, but any slowdown in cattle production at this point is likely to be minimal.

As most readers likely remember, last year’s cattle inventory report from the USDA pegged the market-setting American herd at 92 million head as of Jan. 1, up 3% from the same date in 2015 and the largest herd since 2011. The increase in cattle numbers was no big surprise, given the strong prices of the previous few years that culminated with the record highs seen in 2014. After all, the main role of high prices is to encourage production.

But with those record high prices eventually being replaced by one of the worst bear markets in history in 2016, the industry has endured the opposite extreme: low prices which in theory should function to curb herd expansion.

However, the cattle industry doesn’t turn on a dime. Producers don’t make herd expansion/liquidation decisions based solely on one or two years of market action.

Plus, since it typically takes between 16 and 18 months for a newly born calf to be raised to slaughter, there’s a considerable amount of lag time before market signals actually have some measurable impact on the number of animals turning up at processing facilities.

As such, the deep bear market of 2016 isn’t likely to result in deep cutbacks of calf or beef production, but instead a bit of a slowdown in herd expansion. At this point, pre-report trade guesses suggest next week’s inventory report will show total cattle numbers up about 2% from a year earlier.

Important: These annual inventory reports can be a valuable planning tool. Sure, they’re not fully accurate. But the approximate size of the cow herd today and a rough guess on heifers held for breeding can go a long way toward determining slaughter number trends in the future.

Watch for the details and what they mean, next edition.

Beyond the market factors and biological lag time, there are other reasons to expect U.S. inventory numbers to remain well supported.

Here’s one: An abundance of feed continues to make beef production an attractive option on the central Plains, even despite lower prices for cattle.

It is interesting to note that as of the end of December, feed and roughage supplies in Kansas – a large cattle production state – were estimated at 83% adequate and 14% surplus. That compares to the same month in 2012, when ongoing drought conditions meant feedgrains were only 50% adequate and 2% surplus.

Also: You probably read about the USDA stocks in all positions report, issued Jan. 12. So you know grain bins throughout the US countryside are brimming with corn. Did you actually see the stockpile depicted on a graph? Check the one below.

Quite clearly and simply, there’s a record supply of corn available for feeding cattle. The ample corn supply points to lots of demand for calves and feeder cattle. That’s supportive for their prices. Which in turn is an incentive for calf producers to maintain their production level. 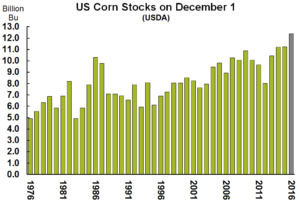 “My future depends heavily on the export demand for beef.”

Those were the words of a cow herd owner this week, conversing with the editors of this report about the cattle market outlook. His point was that he wants to keep seeing signs of solid export demand if he’s going to be optimistic about the profits and the value of his herd.

While overall red meat supplies in the U.S. have increased dramatically over the past couple years, exports have risen as well, helping take some pressure off the domestic U.S. market.

According to the latest U.S. export numbers, beef shipments in November totaled 115,335 million tonnes, an increase of 20% over the same month a year ago and the largest since July 2013. January to November 2016 exports were 10% above the same period in 2015.

Taken alone, those export numbers do offer this farmer some optimism.

However, we sense a high degree of uncertainty these days, especially among Canadian producers, and among US producers as well. Those keen to see more exports are hoping the policies of the new U.S. administration won’t prove disruptive for an industry that’s increasingly reliant on foreign buyers.

In fact, economists at Rabobank have warned the U.S. beef industry must be able to sustain beef exports of around 11% of total production in order to offset the growing herd, something it has never yet done.

Mexico, a popular Trump target, is actually one of the top 5 buyers of American beef, with purchases in 2016 projected at over US$1 billion.

The possibility of a so-called border access tax, or “border adjustment tax” is generating conversation too.

None of these issues will be clarified soon.

And there’s an additional product of this uncertainty: There is considerable discussion around the direction of the US/Canadian dollar exchange rate. Importers and exporters need to be extra careful about hedging their currency exposure.

Result: The purpose of this article is not to enter a political discussion, simply to point out that trade policy changes are injecting a great deal of uncertainty in the industry. Various participants in the beef chain are infusing a lot of “what-if” scenarios into their business plans. From times of uncertainty such as this, risks do arise but so do opportunities. It will be an interesting year.

How about the charts?

In a world full of fundamental and political forces that are hard to analyze, we turn to the charts.

And for what it’s worth, the charts continue to show three-month uptrends.

The April live cattle future remains more than US$20/cwt above its October low at press time. Last week’s column advised that it was looking stretched and due for a setback. There are no clear bearish reversal patterns on the charts yet, but it wouldn’t be a shock to see some soon.