It’s the goal of every horse owner who intends to breed a mare to produce a good, strong, healthy colt. To accomplish this goal, there are many considerations to be taken into account from before the mare is to be bred through the first year of life of the colt. 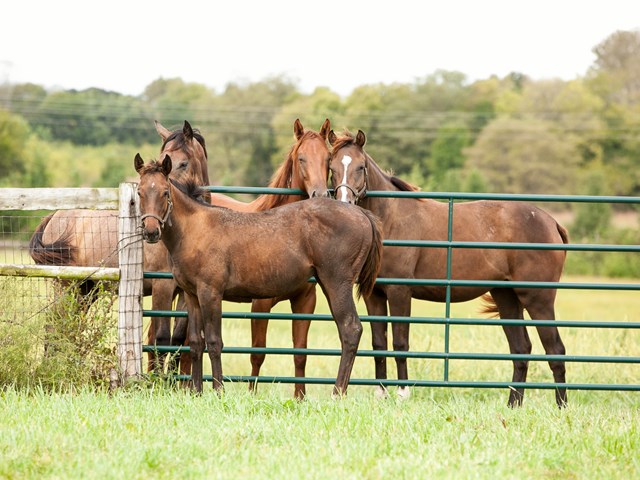 It’s the goal of every horse owner who intends to breed a mare to produce a good, strong, healthy colt.  To accomplish this goal, there are many considerations to be taken into account from before the mare is to be bred through the first year of life of the colt.

Mares Prior to Breeding through Foaling

Several management items should be taken into consideration about the mare prior to breeding. Vaccinations, de-worming, hoof care, nutrition, body condition score, and genral/reproductive health are of utmost concern.

Optimum vaccination and parasite control programs vary according to regional and farm disease prevalence.  The goal is to prevent infectious and parasitic diseases not only in the mare, but also in the foal by maximizing colostral antibodies and minimizing internal parasites passed to the foal. All broodmares should be given tetanus toxoid and rabies before breeding, and rhinopneumonitis (EHV) killed-virus vaccine at the 5th, 7th, and 9th month of pregnancy.  A 6-way vaccination containing EWT/FR and West Nile, Ivermectin dewormer and checking for caslicks should be done 1 month prior to foaling. Strangles vaccine should be considered if it is an endemic problem. 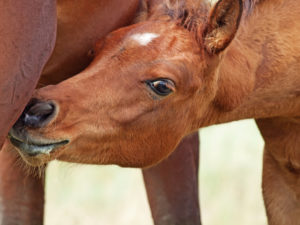 For internal parasite control, the mare should be on the same control program as the other mature horses on the farm.  Most de-wormers are safe, but some are not  suggested for bred mares.  After foaling, mares should be treated for internal parasites within a few days of foaling to reduce the transmission to the foal through the mares milk.  Foals should be treated at 2 – 3 weeks of age to minimize the roundworm (ascrids) as they are the primary parasite of horses less than 2 years of age.  To determine the best de-wormers to administer as well as when and how often, it may be best to consult your local veterinarian.

It is important that broodmares are kept on some type of hoof trimming schedule.  This will allow them the ability to travel, graze, socialize, and maintain good general health.

Proper nutrition is essential in the broodmare through pregnancy, foaling, and lactation.  It is important for mare owners and managers to understand that nutrient requirements in the broodmare change drastically throughout the cycle.  One of the biggest mistakes that mare owners and managers tend to carry out is to over feed the mare in the first eight months of pregnancy.  This causes mares to become obese which in turn creates a strain with too much weight on her frame.  Mares in this stage of pregnancy actually have the same nutrient requirements as mature horses at maintenance, and should be fed similarly. This does not mean they should be fed hay alone. Some type of mineral/micronutrient program should be in place.

The general and reproductive health of each broodmare is important to watch. In preparation for breeding the mare should appear bright and alert with no obvious signs of lameness or illness.   A body condition score (BCS) of 5 to 6 has been suggested as ideal for breeding.  If the mare is under-weight at breeding, but on the gain, research suggests that her chances of becoming pregnant are significantly increased.  If the mare is emaciated (BCS 1-2) or obese (BCS 8-9) then chances to become pregnant or maintain pregnancy is drastically reduced. When considering reproductive health, uterine infections and irregular reproductive cycles in mares are challenges that equine veterinarians deal with every breeding season.  Through proper nutrition, medications, hormone treatments, and/or therapy, many of these conditions can be treated successfully and a healthy live foal can still be produced.  Once again, consultation with a local veterinarian should occur if there are questions about the reproductive status of the mare.

Colts from Foaling through One Year of Age 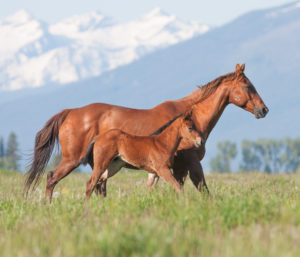 While colts ranging in age from 0 – 3 months of age can be introduced to a grain ration that can be fed in a creep feeder at a rate of 0.5 – 0.75% body weight per day. It isgenerally unnecessary to supplement prior to 90 days of age if the broodmare has been properly fed during late pregnancy as well as early lactation.  At 90 days of age, moderate amounts of a well-fortified foal feed can be introduced to the colt gradually and increased until it is consuming ~1.1 lbs of feed per day per month of age.  It is important that foals be accustomed to eating concentrate before weaning. This will decrease weaning stress and allow for continued balanced growth. It is important to note that with initial consumption of a grain product, a compensatory growth spurt will occur that may result in a potential developmental orthopedic disease (DOD) condition.  This is an especially important consideration with fast growing foals that are eating with their dam. If there is any doubt about the growth rate of the foal, chart the weight weekly, and consult an equine professional. Many of the conditions associated with DOD can be managed through manipulation of nutrition and environment.

Foals are often weaned between 4 and 6 months of age.  Weaning through 12 months of age is a critical stage of growth to prevent DOD.  This is when the skeleton is most vulnerable to disease and nutrient intake and balance is most important.  Four nutritional factors that greatly affect the onset of DOD are mineral deficiencies, mineral excesses, mineral imbalances, and dietary energy excess.

Mineral deficiencies can lead to DOD in young, growing horses.  Typical grass hay/oat diets or typical alfalfa hay/oat diets contain insufficient quantities of several minerals.  If colts are to be grown on grass hay and oats alone, they can be deficient in calcium, phosphorus, copper, manganese and zinc which are all important for proper skeletal and soft tissue growth associated with tendons, ligaments, and growth plates. If colts are grown on alfalfa hay and oats alone, adequate calcium will generally be provided by the feed, but other minerals such as phosphorus, copper, manganese and zinc can be deficient leading to potential DOD or other associated lameness. It is important that young horses are offered properly balanced rations along with good quality forage sources, and appropriate exercise to prevent diseases.

Horses can tolerate fairly high levels of mineral intake, but excesses of certain minerals such as calcium may actually reduce the absorption of other minerals that are necessary in the proper development and metabolism of the growing horse.  Excessive calcium intake can occur when legume hay is the primary forage source.  This does not mean that legume hay is a bad forage source as it contains many beneficial forage qualities to the horse.  However, excessive calcium can reduce the absorption of other minerals such as phosphorus, zinc, and iodine. To address this, a properly balanced ration needs to be made available to the young, growing horse so that adequate and available amounts of phosphorus, zinc, and iodine can be absorbed in the presence of the high calcium levels.  These minerals are necessary in skeletal and soft tissue development along with the regulation of metabolism. A deficiency in one or more of these minerals can once again potentially lead to DOD, as well as disrupt the homeostasis of overall metabolism. It’s important to note that over supplementation of these minerals can cause potential problems, so further supplementation of fortified feed is generally unnecessary. Goiter is an example of over-supplementation of iodine.

The actual amount of individual minerals in the ration may not be as important as the ratio and availability of the minerals in it. High levels of phosphorus in the feed ration will inhibit the absorption of calcium, and in turn will lead to a deficiency.

Calcium to phosphorus ratios should never drop below 1:1 unless in a fortified feed ration where high amounts of calcium are being fed (i.e. legume hay).  The ratio of zinc to copper should also be 3:1, so that copper does not affect zinc absorption.

One of the most common problems of feeding young horses is excessive energy intake leading to rapid growth, which may create a predisposal to DOD. Historically it was agreed-upon that fast growing, heavy colts are more prone to incidences of DOD, but more current research has revealed that high blood glucose and insulin levels may also lead to it.  This would suggest that feed rations that cause high glycemic and insulin responses such as those that are high in starch may actually increase the potential for DOD. It may be beneficial to feed young, growing colts rations with moderate to low starch levels to help reduce a potential for DOD.

There are no simple rules about how much grain is too much to feed colts. The typical book values of ‘expected feed consumption’ for a yearling colt is estimated at 1.0% – 2.5%/day BW of forage and 0.5% – 2.0% BW/day of grain.  While these ranges are quite large, most breeding operations would generally feed on average ~1.5% BW/day of forage and ~1% BW/day of grain. This may not prevent DOD.  The surest way to document proper growth rates is to weigh and condition score colts on a regular basis. These values can be compared to a standard to determine if the colt is on the proper growth track. If the colt is ahead or behind the average growth rate, then feeding adjustments can be made if the colt is being fed alone.  While this may be the best way, in most stock horse operations it is not the most reasonable method since most yearlings are not halter broke, not fed alone, and many farms do not have scales to weigh horses on. The most common and reasonable method is to feed a good quality fortified ration balanced for young horses and consult with an equine professional to grow the best colts possible.

Growing good, strong, healthy colts requires a great deal of hard work and dedication.  With proper management, nutrition, and occasional professional consultation, colts can reach their genetic potential and thrive in their suited disciplines. To determine the best feeding program throughout the breeding process contact Hi-Pro Feeds or visit our products page.