Earlier this year we shared a story on Ethan Wilkinson, an accomplished and impressive young cowboy mounted shooter. He has continued competing, and wanted to provide you with an update regarding how he’s been doing.

Earlier this year we shared a story on Ethan Wilkinson, an accomplished and impressive young cowboy mounted shooter. He has continued competing, and wanted to provide you with an update regarding how he’s been doing.

This May, Ethan won the Albequerque State Competition, and became the youngest Level 6 in the sport of Mounted Shooting just a few months shy of being the youngest level 6 in history.

“It was kind of a hard road getting there,” Ethan says.  “I was on a hot streak for a little bit at the end of my Level 4 and beginning of my Level 5.  I was winning and doing great.  Then, I just kind of got to a point where I wasn’t winning a whole lot.  I was getting some small ones and winning side events, but I wasn’t winning any of the main events.”

When asked how it felt to finally reach Level 6 in cowboy mounted shooting, Ethan laughs, “Honestly, it was the biggest relief ever.  I’ve been running with these guys since level 4, and now it’s a lot more relaxing knowing if I don’t win it’s not slowing me down moving to the next level. “

Ethan’s equine partner, Ginger, took him all the way to the top with the help of Hi-Pro Feeds Performance horse feed.  Ethan shares that switching Ginger to the Performance feed took her from a horse that needed replacing, to one of the most recognized mounts in the sport.

Unfortunately, a recent injury at the Mid-Mountain Regionals threw a wrench in the works. “Ginger over-reached and cut her foot. She’ll be all right with a couple more months of rest,” Ethan assures.

Luckily, Ethan had also been riding another horse named Foxy.  “She’s a 5-year-old mare that I started when she was two. I just really started shooting on her a few months  ago. She took to it well, so I started seasoning her. I was lucky that I’d already started hauling her when Ginger got hurt. This last competition was the Central US Championship, and she did great,” Ethan states proudly.  “Foxy had only competed at smaller events, but this one was much bigger. There were 115 competitors, mostly upper level, and we finished 11th. It was the first time I’d ever really pushed her. A couple more months of training is all we need.” Recently, Ethan and Foxy won the Young Guns World Championship with Mounted Shooters of America in Fort Worth.

Foxy had a rough time in the beginning.  She got hit with an especially bad choke in February 2015. The vet was concerned they would have to put her down. “She was looking pretty poor at that point because we were having a hard time figuring out how to feed her after the choke. Several people were giving us advice, but nothing was working,” Ethan says. 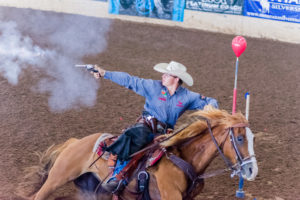 It was at this point that Chris Morrow, DVM in Amarillo suggested they start her on Alfa-Pro™.  “Alfa-Pro was the best thing that could have happened to that horse. I don’t know of any other feed that would have worked. She did really well on it, and we got her fattened back up and healthy.”

So considering her inexperience and health challenges how did Foxy do at the Central US Championship in Stephenville? “She didn’t have one bit of nerves. Foxy’s kind of figured out what her job is, and she was just itching to do it. She walked into the arena with her head down, and was ready to do what she needed to do. I feel very fortunate,” Ethan states.

As with any accomplished, ambitious young person, Ethan has big plans for the future.  “We’ve got a bunch of big events coming up,” Ethan says with anticipation. “I’ve been working with a few new horses, and I’m hoping to get them ready to go. I’ll ride them at the small events, and save Ginger for the bigger competitions. My main goal is to get my horses ready so I can focus on training other people’s horses.”

“I really enjoy training horses. I love seeing their progress, and seeing other people do well on horses I’ve worked with. Bryant Pace is a world champion reining horse trainer, and he rode Ginger at an event. It’s an incredible feeling when someone like him tells you that you’ve done well training a horse, it really means a lot,” exclaims Ethan.

As a young teenager, Ethan Wilkinson has a long and promising road ahead of him with big dreams and a solid foundation already started in the cowboy mounted shooting world. This July he competed in South Dakota and picked up his first two level 6 wins.  Hi-Pro Feeds is proud to be a nutrition partner for Ethan’s cowboy mounted shooting horses ensuring that they get the high quality and consistent feed that they deserve.