Cattle spread over hogs will be wider than usual

Our report from Feb 22 talked about the unusually wide spread enjoyed by cattle prices over hogs. This topic deserves further attention. In this report, we look at the more typical, historical spread between cattle and hog prices and offer our thoughts on where the spread may go from here. After many decades of cutbacks in cattle inventories, contrasted with expansion in the pork and poultry sections, we’re into what the DePutter analysts have termed a “two-tier” meat market: beef at the upper end; pork and chicken far below.

Our report from Feb 22 talked about the unusually wide spread enjoyed by cattle prices over hogs. This topic deserves further attention. In this report, we look at the more typical, historical spread between cattle and hog prices and offer our thoughts on where the spread may go from here.

After many decades of cutbacks in cattle inventories, contrasted with expansion in the pork and poultry sections, we’re into what the DePutter analysts have termed a “two-tier” meat market: beef at the upper end; pork and chicken far below.

In fact, the spread of US cattle prices over hogs reached an historic extreme in March of 2015.

Such a wide spread, however, cannot be expected to continue. The differential will eventually shrink, although it won’t go back to old levels of the 1970s through to the late 1990s.

Before discussing why, let’s review some charts.

The long-term monthly chart below (which looks back as far as the 1970s) shows ratio of nearby live cattle futures vs. nearby hog futures. (To bring the ratio into line on live basis, we converted dressed wt hogs to live, using 0.74 conversion.) 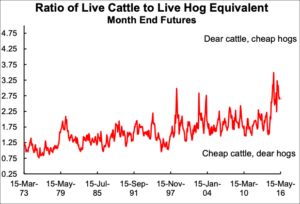 The graph below uses similar data. Here, instead of the ratio above, we look at the spread of cattle over hogs. 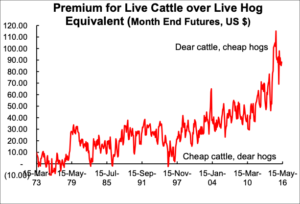 Notice in both cases, but especially in the spread, how times have changed from the 1970s through the late 1990s.

The cattle surge over hogs is, in the context of this long-term view, nothing short of spectacular.

For Canadian and US readers interested in the Canadian cattle/hog relationship, the graph below depicts the cattle to hog spread in Canada, from the mid-1980s until recently.

Notice Point A on the chart. This corresponds to the meltdown in hog prices in late 1998, which made cattle seem expensive in relation to hogs.

Point B is the start of the BSE crisis in late spring/summer of 2003. Nobody wanted market-ready cattle or cows. This issue lingered for several years and some people in the industry tried to time border re-openings. By the mid to late 2000s, various countries slowly started resuming imports of Canadian beef/cattle. (Japan for cattle under 20 months of age in 2005 and the US in 2007.)

Point C is the recent bull market in cattle, which peaked in April 2015. The Canadian peak was slightly later than in the US and the subsequent sell-off slightly less severe. This can be partly attributed to the cushioning effect of the weak Cdn $. 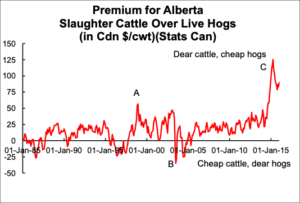 Back to the question at hand: Why do we expect a continued high cattle:hog ratio, and likewise a continued wide spread of cattle over hogs?

And: why will we not see the extremes of the past couple of years, with cattle flying so high while hogs are grounded?

We already answered part of these questions. Generations of cutbacks in the beef cow herd here in North America are behind the current relatively high prices for cattle. You can’t turn those cutbacks around quickly.

Expansion is happening, as explained in recent reports. But the expansion is slow and will take the time required by the natural reproductive time of the bovine creature, before translating to consistently higher supplies of beef at the consumer level.

Meanwhile, measured in the big picture, pork production is growing and stealing a greater proportion of the total meat supply away from beef.

Prices for these animals and for the meat they produce tend to adjust at a level that clears the supply. The lower-supplied cattle and beef marketplaces can function to clear the supply at a relatively higher level than the heavily-supplied hog and pork markets.

However, when markets reach an extreme as they have recently, there will be an obvious and natural tendency for the high beef prices to curb consumption and for relatively cheaper pork to enhance the demand for pork. Over time, this is bound to pull the two markets closer together.

Even so, given its relatively smaller supply niche, you can expect the beef market to adapt in a relatively higher playing field than what was seen 15 to 30 years ago. Given the current lower supply of cattle and higher supply of hogs, a price relationship of those bygone days would run the continent right out of beef and leave a surplus of pork.

At the same time, that old price relationship would cause cattle to be so expensive in relation to pork that you’d see an acceleration of cattle expansion and a collapse of the hog business – something the free marketplace simply would not let happen.

We hear the refrain: “I used to eat roast beef and potatoes every day and my kids and grandkids seldom eat beef…”

But that story is partly about prices too, just as much as changing tastes.

Point is, the beef price has to be relatively high to discourage high per capita consumption of beef; it has to give the population economic incentives to eat less per person than was the case in decades past. This is how it does its job of keeping consumption in line with supply.

Meanwhile, for what it’s worth, current forecasts are that actual beef consumption could edge higher the coming year, as US beef production starts to increase in 2016. On March 9 the USDA released a US per capita beef consumption forecast for 2016 of 54.3 pounds/person. That would be up from 53.9 pounds in 2015 and 54.1 pounds in 2014.

Folks in the beef business will be hoping this does not cause cattle/beef prices to lose their big edge over hog/pork prices. We will keep you posted on the outcome!