Cattle Futures: To hedge or not to hedge?

Anyone who has watched and studied cattle futures for even a brief period of time will be aware they‘re hard to predict – and extremely volatile, especially the past few years. For cattle producers, that volatility has no doubt led to more than a few sleepless nights. After all, the stakes are huge when trying to decide when, or even if, to hedge (or forward contract) in order to lock in a market price that makes sense for your operation. 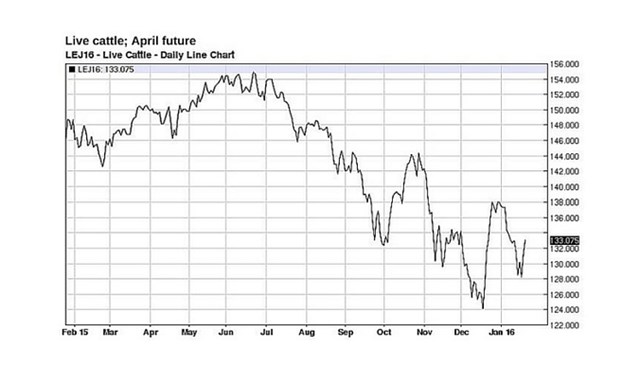 Anyone who has watched and studied cattle futures for even a brief period of time will be aware they‘re hard to predict – and extremely volatile, especially the past few years.

For cattle producers, that volatility has no doubt led to more than a few sleepless nights. After all, the stakes are huge when trying to decide when, or even if, to hedge (or forward contract) in order to lock in a market price that makes sense for your operation.

During the massive bull market heading into late 2014, there were lots of stories throughout the industry about feedlot operators who short-hedged too soon on the way up and wound up sending millions of dollars to their brokers. Some operators cut themselves out of the best part of the bull market, never fully raking in the benefits of the super-high prices because they had hedged at lower levels.

On the other side, there were stories about operators who grew tired of hedging and contracting in the bull market and stopped doing so, just in time to get caught in the severe bear market of the past year.

The producer who regularly hedged to lock in a profit on the way up – and also on the way back down – did better. Those who ran without hedges on the way up did incredibly well and gave some back on the way down. So be it.

Of course, the operator who ran unhedged on the way up, caught the top and hedged aggressively on the way down did best.

But how many are out there who actually did that? Not a lot. It’s easy in hindsight; not so easy in reality when it`s your money is on the line. 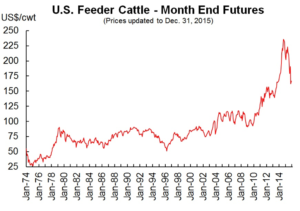 So the million dollar question is, how do we avoid those sleepless nights; how do we maximize our returns on the way up and minimize the damage on the way down?

The first option we might suggest is taking an even, consistent approach to your marketing, regularly locking in profits when they’re available. One thing veteran market observers will probably agree on is that we tend to overestimate our ability to see the future. The solution is not to gamble and try to peg the top of the market.

Another option is to hedge carefully on a regular basis while also leaving a portion of cattle open for selective decision-making. This feeds into the desire to try one’s luck or skill at calling the market. For those who do take a selective, self-directed approach with a portion of the cattle being fed, it’s no easy task. That said, it can offer a pay-off over the course of years, given a mix of caution and savvy.

But let`s face it, marketing is a difficult game. It’s hard to assimilate the myriad of facts and opinions. Key market factors can vary from time to time. What’s noise and what’s a real market driver? There is an element of randomness in the day to day noise, the week to week ebb and flow of the market. Not only do fundamental factors come into play but also the whims of large speculators.

We are doing business in an interconnected world and it’s hard, if not impossible, to collect and successfully analyze all the factors and forces.

With that in mind, we can offer a few basic ideas from a veteran market watcher on what to look for when trying to decide what your next move should be:

Friday’s report (Jan. 22) pegged the number of December feedlot placements at 1.53 million head, down 1% from the year-ago level. Ahead of the report, traders and analysts were anticipating a larger decline of 4-5%.

The total on-feed inventory included 7.16 million steers and steer calves, up 3% from the previous year, and accounting for 68% of the total inventory. In contrast, heifers and heifer calves accounted for 3.41 million head, down 7% from 2015 – clear evidence that American ranchers are holding back more females for breeding stock.

Now let’s watch and see what the market does with the news in the coming week and see how that affects our futures.