A livestock inventory released March 3 by Statistics Canada pegged the total number of cattle on nationwide farms as of Jan. 1, 2016 at 11.96 million. That’s up a modest 0.3% from the same date a year earlier but nonetheless confirms producers on this side of the border are now also in expansion mode following the record high prices of 2014 and early 2015.

The small hint of expansion in the Canadian herd follows on the heels of a USDA cattle inventory report released in late January that estimated the total number of cattle in that country as of Jan. 1 at 92 million, up 3% from the previous year and the highest since about 93 million in 2011.

The number of beef heifers held for breeding on Canadian farms as of Jan. 1 was up 4% year-over-year to 547,300 head, the first increase since 2013. As the graph shows, this number is on the high side of the nine-year range, although still low by the standards of the past 25 years. 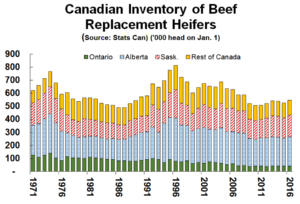 Meanwhile, the inventory of calves on Jan. 1 increased 0.9% to 3.8 million, while the number of feeder heifers was down -1.2% – evidence that producers are indeed holding animals back from the slaughter line for breeding purposes.

While Canadians are holding back more heifers, the beef cow herd is not growing. The total number of beef cows in Canada as of Jan. 1, 2016 was actually down slightly from a year earlier at 3.82 million, according to Statistics Canada. 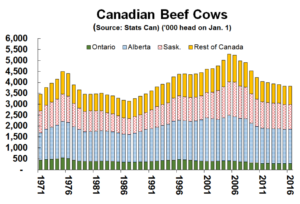 The heifer retention contrasted with a shrinking cow supply can be explained largely by exports of cows into the US. Although domestic slaughter and total cattle exports into the U.S. declined in 2015, Canada still shipped a substantial number of cows to American processors. Therefore, some of Canada’s smaller cow numbers are simply transferred to US supplies in the form of breeding animals and cows for slaughter.

One key message is this: The Statistics Canada report underlines the small expansion in Canada relative to the US. The number of beef replacement heifers in the U.S. was recently reported at 6.29 million as of Jan. 1, up 3.3% from a year earlier, while the total number of beef cows, at 30.3 million was up 4% from a year ago.

Another takeaway: As noted in our Feb. 2 blog post, the rebuilding of the North American cattle herd is not something that is going to happen overnight. Beef supplies will surely increase eventually, but it’s a slow process. And opportunities for profits will continue to exist for cow-calf operators in the interim. The supply of cows and calves in Canada and the US remains small by historical comparisons.

In Canada, the total size of the herd is still well below its most recent peak of almost 15 million head reached on Jan. 1, 2005. Granted, the swelling of the Canadian herd around that time was due to the BSE crisis and the subsequent closing of export markets, but cattle numbers in this country are by no means onerous.

Ditto for the U.S., where total cattle herd is still small compared to previous years. Consider that in 2005, when Canadian cattle numbers reached their zenith, the American herd was reported at 95.8 million head. Combined, the Canadian and U.S. herds totaled almost 111 million head as of Jan. 1, 2005, more than 6% above the Jan. 1, 2016 total.