When it comes to the cattle business, it’s easy to see the U.S. as the bellwether, the country that sets the market tone for the rest of the world. After all, the U.S. produces more beef than any other country in the world and remains one of the top global exporters.

When it comes to the cattle business, it’s easy to see the U.S. as the bellwether, the country that sets the market tone for the rest of the world. After all, the U.S. produces more beef than any other country in the world and remains one of the top global exporters. But as all producers know, the cattle business is competitive. And just like in any other business, there is always some new kid on the block, trying to elbow his way in. For the U.S., that kid is Brazil. Not unlike its meteoric rise as one the top soybean producers in the world, Brazil has become a global power in the cattle business as well. Between 1995 and 2010, the Brazilian cattle herd increased 27%, beef production increased 38% and exports 731%.

The raw numbers show the huge potential of Brazil, with the domestic herd as of 2014 pegged at 211 million head – more than twice the 92 million head counted in the U.S. as of Jan. 1, 2016 and absolutely dwarfing the Canadian herd of just 12 million. In fact, Brazil sports the second largest cattle herd on the planet, trailing only India.

But what makes Brazil truly so formidable is the fact it hasn’t yet hit its stride. Although it is already the largest beef exporter in the world, shipping 1.8 million tonnes in 2013, the country actually still produces less beef than the U.S. despite the fact it boasts a much larger herd. As the chart below shows, however, the once-massive production gap is closing. 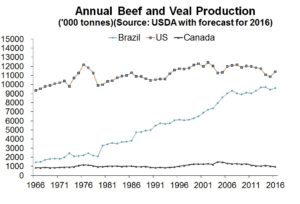 The answer as to why Brazil produces less beef than the US despite a larger herd is not unlike the Brazilian soybean experience, in that inefficiency remains a huge problem. According to a recent report from Rabobank, an undeveloped supply chain, low carcass weights and poor meat quality are among the ills that plague the Brazilian beef industry. Only about 11% of the cattle slaughtered in Brazil in 2014 actually came out of a feedlot, where animals are grain-fed and typically put on more weight than those fattened on grass. Market access remains an issue as well, following bouts of foot and mouth disease and BSE a number of years ago that caused some countries to close their borders to Brazilian beef.

The last outbreaks of BSE and foot and mouth occurred back in 2012 and 2006, respectively, but some estimates suggest Brazil is still only able to export to about half of the global market.

Regardless, Brazil is now shipping its beef into China – the largest importer in the world – and supplies could be flowing as early as later this year to the U.S., the second largest beef importer after China. If that occurs, Brazil will further cement its status as the world’s largest exporter of beef. 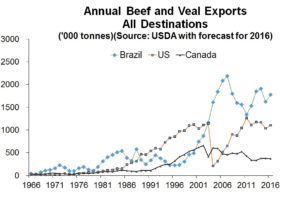 What’s more, the devaluation of the Brazilian currency makes the country’s exports appear more attractively priced to foreign buyers. Although it has gained back some ground more recently, the Brazilian real lost 33% of its value against the American greenback in 2015 amid ongoing political turmoil and the country’s worst recession in a century.

Clearly there is plenty of upside. Not only does Brazil have the actual cattle numbers to be a major world player, the rapid expansion in domestic corn production means beef output should not be curtailed by a relative lack of feedgrains. Indeed, Rabobank predicts Brazilian beef exports will grow by another 1 million tonnes to roughly 3 million tonnes by 2024, giving the country fully one-quarter of the international beef market.

Nations such as Canada, traditionally the sixth to eighth largest exporter in the world depending on the year, are unlikely to match Brazil’s growth over the coming decade.

The global agricultural commodity supply landscape is always shifting. In the years ahead, Brazil is likely to be an increasingly prominent part of the ever-changing beef production landscape – and one that farmers and ranchers will want to pay attention to.

From a North American pricing perspective, the potential for Brazil to continue to grow its beef production could act as a negative factor in the long-term cycles already in play. It could deepen the dips in the cycle during the decade ahead, while taking away some of the upside in future bull markets. Just something to consider for today. We’ll update you on the long-term cycles in an upcoming post.