Beef prices up. How high will they get?

The nature of markets is that even in times of extreme bearishness, there will be small rallies - just as there will always be setbacks in major bull runs. So it’s not surprising then that after enduring one of the worst bear markets on record, North American beef producers are now getting a chance to catch their breath 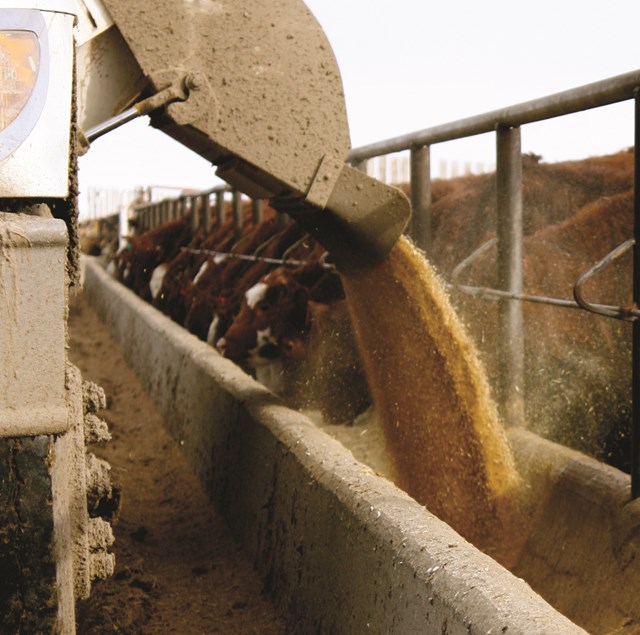 The nature of markets is that even in times of extreme bearishness, there will be small rallies – just as there will always be setbacks in major bull runs.

So it’s not surprising then that after enduring one of the worst bear markets on record, North American beef producers are now getting a chance to catch their breath.

Prices remain in a deep hole compared to two years ago, no doubt about that. But cash cattle and futures have posted a strong bounce the past several weeks, raising hopes and ideas the market is showing both the fundamental and technical potential to form a low of some importance.

Regardless of whether the lows of the summer of 2016 will be revisited in 2017, it is important for producers to understand that no market ever travels in a straight line. Even on the way down from the record bull market that culminated in 2014, there were times when prices rallied – albeit briefly – before resuming their descent.

Let’s take a look at where the upside limits for this bounce might be, and how deep the downside risks are.

Large supplies will limit the rallies

It’s no secret the general atmosphere features a large and rising meat production machine in North America. All readers will know the market conditions that resulted in the bull market of a couple of years ago were far different that they are now.

In fact, long-range projections released by the USDA earlier this month point to even heavier beef supplies for the next couple of years at least. For 2017, U.S. beef production is forecast to reach 26.16 billion lbs, a 4.4% increase over the current year, while 2018 is expected to see another 3.8% increase to 27.14 billion lbs. Production is projected to sag slightly in 2018 (-1.1% to 26.85 billion lbs), before holding mostly steady right out until 2026.

Admittedly, it is difficult or even impossible for the USDA to accurately forecast beef supplies and prices out over the next decade, given the vast uncertainty that is the weather, global geopolitical forces and the multitude of factors that impact domestic and export demand, including currency fluctuations.

That said, we don’t see any glaring deficiencies in the USDA forecasts. They’re probably as good as any. So at least they provide a framework for beef producers to consider when making long-term plans for their operations.

Here’s what we see on the chart

The framework of hefty beef supplies being clear, let’s look now at a cattle futures chart.

Recognizing the supply-side reality, we know we can’t expect a huge bull move. In fact it’s possible the current rally in US cash cattle and futures might stall in the $115-120 area. That zone happens to be at a long-term downtrend line on the chart. This would be a minimal upside objective for the bounce we are seeing.

Prices in that area are easily justifiable even considering the heavy deliveries expected in the months ahead, and even if in the end the USDA’s average price forecast of around $105 is going to be true. Markets swing like pendulums, overplaying and underplaying the average prices. A move to above $115/cwt would be part of the normal ebb and flow of a depressed trading range.

With current prices already up in the $110 zone, up from the lows of around $95-98 for nearby futures and cash cattle, that target zone is within easy shooting distance.

While not a windfall, it could mean producers who put cattle on feed during the depths of the bear market in late summer and fall might come out in the black. 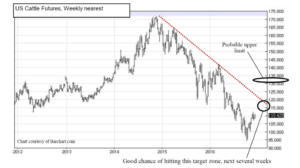 Extending the heavy beef and meat supply picture out into the next couple years, it would not be surprising if someday, futures and cash prices endure a brief dip back to the low ebb of 2016. Not saying it will happen but realistically it’s not impossible. Supplies of beef and competing meats allow for it.

On the upper end of the probable two-year range, it’s conceivable that sometime in the next two or three years we see a pop to the US$130-138 area. Don’t bet the farm on it but it’s possible. After all, the market was there as recently as early 2016. A temporary supply blip in the cattle, hog or poultry sectors, a sudden export surge, a collective money wave from big spec funds in the futures markets… put two or three of these together and who knows? We can’t totally rule it out.

If you do wake up someday to such a sharp recovery, it might be a good idea to remind yourself of the big supplies and production potential in the background. That way you won’t get too caught up in whatever tempting bullish enthusiasm might be circulating at the time.

-Good odds of seeing $115-120 for cash US prices and futures, next several weeks.

-Low odds but an outside chance of seeing $130-138 sometime, next couple years. Don’t dream of anything higher than that.

-Some risk that as the cattle market continues to forge a major low, it takes the odd brief setback to revisit the $100 area or lower, where it was a few short weeks ago.