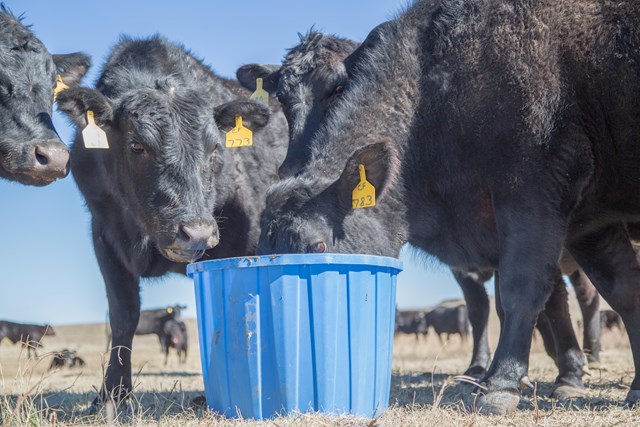 Last edition, we expressed the idea it was time to start watching for topping signals in the rising cattle market.

The market had come a long, long way from its dismal lows of October 2016 and it was time to start watching closely for signs it might be preparing to slip back down.

Cash fed cattle prices had moved higher for several months and were into a seasonal timeframe when the market sometimes tops out. Behind the scenes, supplies of beef and other meats were seen as ample.

In case you missed it, here’s what we concluded, after checking some various factors and indicators:

That was the bottom line as of the April 4 report.

In case you missed that report and want to check it out, click here.

During the two weeks after that report, cash fed cattle prices didn’t do much but futures did rally sharply – understandably given their deep discounts to cash prices.

So what’s new now? Several factors continue to call for caution in the cash-markets, but futures are still trending up without a line-up of sell-signals.

Some observations on the cash fed cattle side:

These indicators and factors could mean the seasonal strength is prolonged and/or a steep downturn does not happen soon. So again, although caution is in order, conditions are not what you’d call totally set up for a disaster around the corner.

Last edition advised that unless the June future fell below about $108, the chart would display an ongoing uptrend.

That’s still the case. In fact, June made a new high today as this report was being prepared.

There might be some resistance around $116 that is hard to get past, but with June trading way under the cash market, it’s hard to imagine a really heavy break unless speculators stampede to the exit doors. 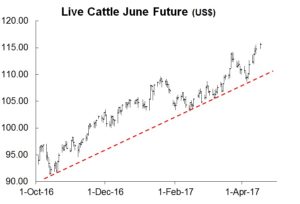 That brings up an important forewarning: The spec element could soon become worrisome.

The most recent Commitments of Traders (COT) report showed managed fund money players added to their net long position the past week. This puts them into their heaviest net long for futures-plus options in nearly three years.

Someday there will be a shift in this. The specs will turn sellers. It might happen soon or it might not happen for quite some time.

When you have a lot of spec fund buying like this, and when it finally tops out, it is not always directly correlated with an immediate peak in futures prices.

In early 2014 when a great tide of spec buying peaked, the market broke briefly and then rallied later, not peaking until several months later.

Still, the heavy spec interest is not something to take lightly. The market is in a much different position than in 2014 when a powerful bull market had a great deal of impetus, partly on the high-octane fuel of declining supplies of beef and total meats.

With that momentous bull market now history, we are in an environment of just moderate bullish upswings in a lower-level range. That could mean that this time around, the top of the spec fund buying spree will happen simultaneously with a top in futures. Something to watch out for. 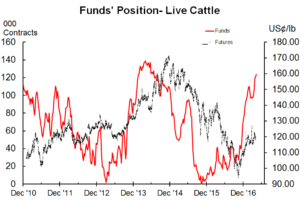 Something else to keep in the back of your mind: meat production is high and rising.

When cattle prices were crashing last year, all the buzz was about massive beef and meat supplies.

Those conversations have gone quiet lately. The talk has become less and less bearish with each step up by the market.

But don’t forget, those big supplies might yet come back to haunt this market.

Even if it’s not talked about as much, the big supply picture hasn’t gone away. Consider these numbers from the latest USDA supply-demand outlook released last week:

Conclusions: Ok for now but don’t go to sleep.

The fed cattle market is holding up nicely and various cash markets are not clearly turning down just yet.

Cattle futures are still working to lessen their wide spread under the cash markets. Given the discounts in futures, they are less vulnerable to weakness than cash prices.  Even if cash prices ease off or decline a little, the June and August futures will have some work to do to line up more closely with the relatively higher cash markets.

The relatively low futures prices mean this is not an ideal set-up for aggressive forward contracting or hedging. However, keep an eye on the spec positions because one of these days a shift from their collective long positioning could knock futures for a loop.