Beef expensive relative to pork: What are the implications for producers?

If you go to grocery stores in Canada and the US, you’ll find lots of beef cuts are roughly twice the price of comparable pork cuts. For example, at one store we visited, the price of a striploin grilling steak was C$28.64/kg or $12.99/lb. A pork loin center chop was priced at $16.85/kg or $7.64/lb. 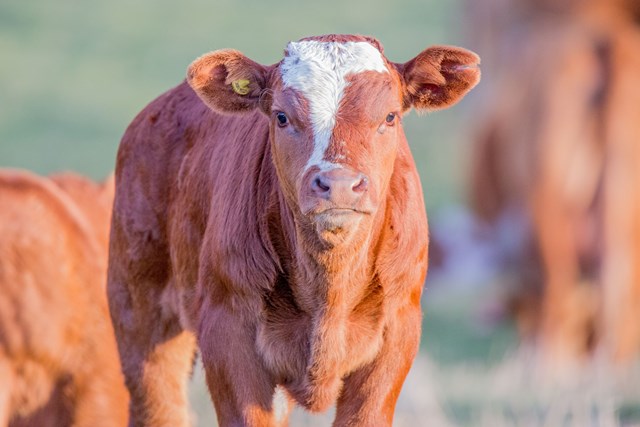 If you go to grocery stores in Canada and the US, you’ll find lots of beef cuts are roughly twice the price of comparable pork cuts.

Depending on sales and the cuts of meat involved, we found cases where beef offerings were as much as three times more than comparable pork packages.

It shouldn’t be a big surprise that retail beef carries a wide spread over retail pork. After all, live cattle are selling for a lot more than live hogs. Based on recent US cash price quotes of around US$130/cwt for live fed cattle and live hogs in the $54 ballpark, cattle are roughly $76 over hogs or roughly 2.4 times the price.

What was said in previous blogs

We’ve been expecting cattle to stay high versus hogs but not nearly as high as in late 2014.

This was explained in a previous posting on Feb. 22, 2016 in which we provided in-depth insight into long-term cattle cycles. “Although cattle will [stay] higher-priced than the historic norm, the spread [was] extreme enough that it won’t hold up the decade ahead.”

A March 21 2016 blog added more information on the subject, explaining further why you could expect a continued wide spread but nothing like the one seen at the 2014 peak: “Such a wide spread… cannot be expected to continue. The differential will eventually shrink, although it won’t go back to old levels of the 1970s through to the late 1990s.”

So… as expected, cattle and beef continue to carry fat premiums over hogs and pork.

But also as expected, the premiums are down from the historic peak.

Back in the old days of the 1960s through 90s, it was common for live cattle to trade at or slightly below live hogs (i.e. at a ratio of 1:1 or slightly less). It was common then for the pendulum to swing to a 2:1 ratio during cattle bull markets but cattle seldom rose past that ratio.

Now, it seems like when cattle get down to around 1.75 to 2 times the price of hogs, they find support there. A ratio that low would probably prompt a swing back toward higher cattle prices, lower hogs – or both – thus pushing the ratio back up.

Don’t be surprised if you never see parity on a livewt basis at all, over the course of the next decade. 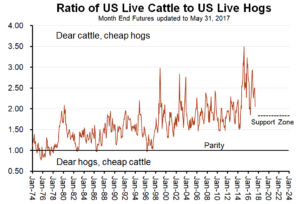 Why is the cattle market doing relatively better than hogs and likely to continue doing so?

There are many reasons for the wider spread between cattle and hogs.

A variety of minor ones could be listed, ranging from increasing use of beef by fast food restaurants, shifting consumer attitudes, export demand for beef and lots of others. Boil it down to one dominant factor and it’s quite simply this: The beef supply is not rising as fast as the pork supply.

Generations of cutbacks in the beef cow herd here in North America have occurred the past four decades contrasted with expansion in pork production.

The chart below goes a long way toward showing why cattle prices in North America have done relatively better than hogs, the past few decades. 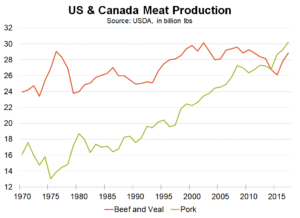 Most everyone knows pork output in North America is growing and stealing a greater proportion of the total meat pie. But not everyone connects the dots to conclude what it might mean for the beef industry’s prices and profits.

Our view is that prices and profits will swing up and down, as they always have. There will be good times and hard times.

But in general, underlying those swings, we see solid underpinnings for the beef markets and for profits in the cow-calf sector.

The future is bright, and other key takeaways

1.    Cattle/beef prices won’t revisit their high extremes over hogs/pork seen in 2014 for a very long time, but will maintain stronger spreads than during the pre-2000s.

2.    Cow-calf operators will benefit from this. As long as you see beef maintain premiums over pork, and cattle over hogs, the spreads will percolate back to the prices you get for the feeder cattle and calves you produce.

3.    Future is bright. The cow-calf sector represents a business sector that has generally positive prospects in the decade ahead. Sure, there could be periodic downturns – the cliff-drop in feeders and calves from the 2014 cattle market peak to the trough of the fall of 2016 was one recent example. There is another cyclic low ahead somewhere. But the point is, you’re not likely to see your prices and profits get bombed by massive overproduction of beef. If you do, the blast will probably be even more severe in the neighboring pork sector.