When the supply of any commodity is heavy, and prices are low, there’s often lots of talk about demand as well. Questions such as: “Will the supply overwhelm the market or will the demand side support prices?” 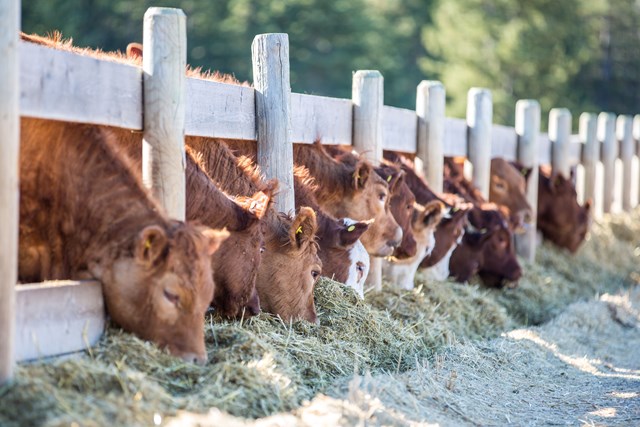 When the supply of any commodity is heavy, and prices are low, there’s often lots of talk about demand as well. Questions such as: “Will the supply overwhelm the market or will the demand side support prices?”

North American cattle producers have plenty of experience with declining supply – including the record bull market peak attained in late 2014 in the US and 2015 in Canada, after years of weak prices and southern Plains drought reduced the American herd to its smallest since the early 1950s.

As supplies of beef and other meats rose during 2015 and the first three quarters of 2016, the market experienced the opposite. Rising supplies overpowered the market. The marketplace was forced to clear the rising supplies at sharply lower prices.

Now, it appears the cattle market is into a period of relative calm, with US producers still expanding their herds following the 2015 price peak (see our Feb. 7 post on the latest USDA cattle inventory report), but with what we might term “solid demand” managing to keep prices generally well supported.

Indeed, there are plenty of reasons to be optimistic about the demand side, not the least of which is the continued strong pace of American beef exports.

Over the years, we’ve often heard producers expressing worry that consumers aren’t eating as much beef as they used to. Gone are the old days of meat and potatoes. Gone are the days when beef was a staple in the dining rooms of millions of homes across North America.

But does this mean you should be pessimistic about the future of the beef business?

That’s an underlying societal shift, no doubt. But it’s offset by many other variables: more consumers with a growing population. More of the diet coming from fast food establishments and restaurants, which do include beef. More exports.

On the export front, the USDA recently reported that U.S. beef exports for calendar year 2016 increased 11% in volume and 1% in value from a year earlier, with exports for the month of December up 24% from the previous December and the heaviest since July 2013.

Looking ahead, the USDA is projecting continued strong export movement, with shipments in 2017 forecast at 2.71 billion lbs, up 6.4% from a year earlier and nearly 20% above two years ago.

This tells us that even if a lot of Americans and Canadians aren’t chewing through as much beef as they used to, people outside our borders are, and that’s where an increasing percentage of our production is heading.

Lower beef prices at the grocery store level seem to be stimulating domestic consumer demand. After slumping in 2014, per capita beef consumption in the U.S. rebounded the following year and is projected by the Livestock Marketing Information Centre to steadily increase out to 2018, where it is expected to hit its highest level since 2010 at around 108 lbs.

The increased per capita consumption is occurring partly just because more is produced.

But there’s more proof of solid demand too: Analysts at Kansas State University and the Livestock Marketing Information Centre recently released an updated “Fresh Beef Demand Index” which measured demand in 2016 down slightly from 2015 but still up from all of the 10 years of 2005 through 2014.

The measurement is based on the price related to domestic consumption, effectively measuring where the price settles at in order to absorb the supply. The Index itself is a depiction of changes over time compared to a base period. This is outlined in a recent issue of The Daily Livestock Report, produced for the CME Group by Steiner Consulting Group.

Economic signs are positive as well. Major U.S. stock market indexes are exploding. The U.S. economy is firing on all cylinders, with strong employment numbers and corporate profit statements. The economic backdrop is creating a supportive demand environment for most commodities and products coming from the farm.

Granted, the beef industry might run into some demand-side challenges the next year or two from increasing supplies of pork and chicken.

But there too, we see some positive indicators. Pork belly (bacon) prices are climbing to 52-week highs, prompting us to wonder if this part of the pig is entering a new higher echelon of demand. As mentioned recently in an article by broker Dennis Smith on barchart.com, the recent drawdown of belly stocks and rising prices means “it will take larger increases in prices (than in the past) to ration supply or curb consumption.”

Chicken is a less direct competitor to beef than pork, but there too we see certain demand-side indicators pointing up; one being more potential demand by China, presumably partly due to widespread bird flu in that country.

Demand is not telling you to give up on the beef business. Demand is clicking along not too terribly badly.

Demand can’t answer all our questions

Taking a look at the demand side of the beef business isn’t going to say anything about the twists and turns in the market in the weeks ahead. Demand is an underlying market factor – a very basic factor for the general pricing structure. Demand stats are not going to help you peg the right time to place cattle on feed, or pick the right time or price to place hedges or forward contracts.

Beyond the obvious consideration of profitability, we tend to turn to the charts for clues on timing of placing risk-management positions.

In that regard, notice the gap on the June future. That’s when futures sank after the Jan. 27 cattle on feed report (see arrow), which pegged most numbers above expectations and sent traders bailing out the next trading day. 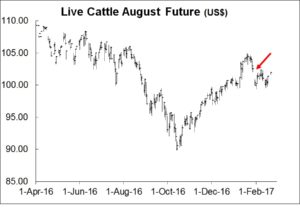 We warned four weeks ago that live cattle futures appeared to be showing signs of fatigue after a rally lasting 3 1/2 months and this action keeps us with the same thinking. The market is trying to fill the gap and once that’s done, there’s risk it turns lower.

Meanwhile, as with many other commodities, spec funds have recently been active buyers of cattle futures. This creates the potential for a wash-out of selling, if funds decide collectively to lighten up. The big funds do tend to follow the herd instinct. Now and then a stampede in or out can bull up or bear down on cattle futures, just like lots of markets. Lately their heavy net long position makes live cattle futures more vulnerable to the latter. 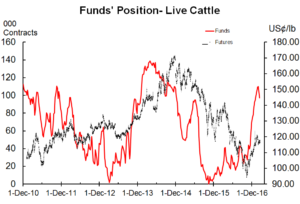 Not that we’re flat-out, drop-dead bearish. After all, futures are discounted to cash prices. Cash prices are in the $120 to $121/cwt ballpark and the April future is trading around $115, June $105 and August $101. As long as the cash market can keep it together, it’ll be hard for futures to fall terribly heavily. It might be a good idea to hedge just lightly – not heavily – with the market as inverted as this.

Putting it all together:

The cattle business seems to have some solid demand underpinnings at this time. From a shorter-term standpoint of the next few weeks/months, some light but probably not aggressive hedging or forward contracting may be warranted.