Are Your Livestock Getting What You Feed Them?

Have you ever asked yourself whether or not your livestock are all getting the feed you put out for them?  Whether you feed on the ground in native pastures, or in troughs in pens, how confident are you that all of your animals are getting their share? 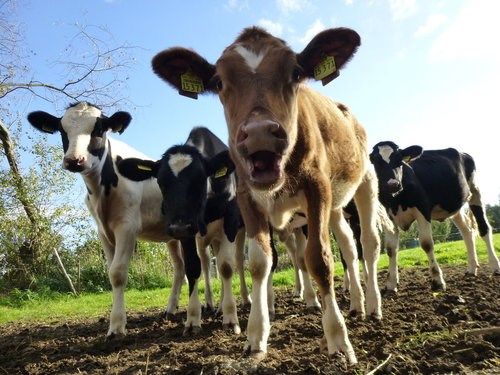 Have you ever asked yourself whether or not your livestock are all getting the feed you put out for them?  Whether you feed on the ground in native pastures, or in troughs in pens, how confident are you that all of your animals are getting their share?

In her talk, Dr. Bowman discussed their efforts to understand the dynamics of a group of animals eating from self-fed supplements.  I thought it might be helpful to discuss some of the factors that seemed to influence how much consistent the intake was in a group of animals.

Just so you understand how researchers get data on self-fed feeding situations, I’ll try to explain their procedure.  First each animal is given an electronic ear tag.  Equipment that can read and record these ear tags is placed over the feeding stations so that each time an animal sticks it’s head in the trough, the equipment reads the animal’s number and the time it spent eating.

From this data, how many times an animal is visiting the trough can be counted, and using the time spent there, an estimation of how much supplement it ate can be figured.  Using this type of equipment with a variety of troughs, feeds, animal densities, and trough spaces, the researchers can then begin to see the factors that influence consumption.

Just so you don’t think that more is always better, they also found that when cows were given 36 inches of trough space per cow to eat from, everyone was able to eat with little fighting.  However, when they increased the space to 71 inches per cow, more fighting took place which resulted in those fighting not getting their share of the feed.

It seems that the ideal trough space for your animals is somewhere in the middle.  I suggest you watch as they eat and adjust trough space from day to day until you find that the entire group is comfortable and eating together.

Another factor in getting a consistent consumption of a group of animals is the amount of supplement fed at a time.  It seems that the more supplement is fed, the greater the odds that the livestock will be able to eat the target amount (the amount you want each of them to eat).

The form of the supplement (cubes, meal, blocks, liquid, etc.) also has an effect on how varied the intake of the supplement is.  Not surprisingly, the highest variability of intake was seen when feeding blocks to livestock.  Meal-mixes and liquid feeds had less variability, but there were fewer non-consumers with blocks than the other feeds.  Another interesting side note on blocks was that where the researchers used different levels of protein in the blocks, there were fewer non-consumers as the protein level of the block increased.

Also, the longer the animals have been exposed to the supplements, the more even the intake became.  All livestock have to have a positive digestive feedback before they recognize that a feed, or plant, is beneficial to them.  When a new feed is introduced to them, especially one with ingredients they are not familiar with, it can take as much as three weeks before they begin to recognize it as a desirable feed.

So, if you are introducing a new type of supplement to your animals, or a similar supplement with different ingredients, you need to give them time to adjust to it before evaluating how well they will eat it.

Lastly, one of the most important factors in the variability of supplement intake was the quantity and quality of forage available to the livestock.  As both quality and quantity increased, the variability of intake increased as well.  The researchers feel that this increased variability, and especially a greater number of non-consumers, stems from having less competition for nutrients in a pasture.

One other factor these researchers did not mention, but that I think is important is the metabolic differences among animals in a herd.  I’m sure you have all had a few animals that just did not eat supplements.  My customers that feed range cubes on the ground will always point out the cow, or ewe, that “just won’t eat cubes”.  And yet she’s in pretty good shape.  I attribute both her not eating and the good body condition to the fact that something about her metabolism does not require the supplement, or she never got the positive digestive feedback from the supplement.

For whatever reason these animals won’t consume supplement, as long as they are productive each year and are not pulling down the herd average, there’s not a problem with them not eating supplement.  I fully believe that if they declined to a poor body condition, they would begin to eat supplement.

So what steps do you need to take to get a more consistent intake of supplements within your livestock herd?  Basically, you need to insure they have enough space to eat, but not enough to fight over.  Keeping them a bit aggressive and protective of their feeding space is a good thing.  Too much space allows them to fight others off.

Another step is to watch for the highly dominant and highly subordinate animals and try to feed them in separate areas if at all possible.  The subordinates will never challenge the dominants very much so the only way to insure they get some is to make it easier for them to eat without interference.

Increasing the number of feeding stations in a pasture should also help get a more consistent consumption of the supplement.  If you have more stations available, the less dominant animals can run in a part of the pasture away from the more dominant ones and still have the opportunity to eat the supplement they need.

Finally, choose a supplement that the animals can eat without too much trouble.  Don’t look for a block, or other forms of supplement, that is really hard for them to eat.  You may have to feed more often, or only put out what the animals need for a given period of time, but a more accessible supplement will give you a better chance of a more uniform consumption.

Just because the supplement you put out for your livestock is eaten each day, or week, don’t assume that every animal is getting their share.  There are many factors that come into insuring a consistent intake among all the animals you have.  Only through understanding these factors that influence supplement intake in groups of livestock can you make sure that each animal has the opportunity to get the supplement it needs to remain productive for your operation.

Remember the old saying among stockmen, “It’s the eye of the master that fattens the beef.”  Be the master of your animals.