After Long Tumble in Cattle Futures, it’s Late to be Bearish

There is an old market adage that when excessive bearishness is priced into the futures market, it sometimes means the worst won’t come through. In this case, North American cattle producers had better hope that holds true.

There is an old market adage that when excessive bearishness is priced into the futures market, it sometimes means the worst won’t come through.

In this case, North American cattle producers had better hope that holds true.

Looking at the market recently, one notable development has been the extreme decline by the Dec live cattle futures to the US$111-112/cwt area in late April. That drop was in sharp contrast to the seasonal high in March, when nearby US futures were trading near $140. In fact, the Dec future itself was trading as high as upwards of $140 last summer.

In the midst of the losses, the discounted Dec futures were building in expectations of a terribly severe seasonal break. Indeed, the futures market was predicting not just a deeper than normal seasonal decline from the April highs to August lows. It was going farther than that. It was predicting a continuation of losses right through into December.

The February and April futures were trading even below the August and December months, projecting ongoing, continued price weakness well into 2017.

We’ve been thinking deferred futures have been getting pretty close to over-stating where cash prices would trade in the summer, fall and winter. So it’s been no great surprise to see futures rallying a little the past several days. Seems other market-watchers and traders started to wonder if perhaps the futures market was overselling the bearish case.

So where’s the bottom?

First off, our long-term cycle work tells us it’s too early to expect the final low for the 10-12 year cycle. This was outlined in our post of a couple weeks ago.

However, that doesn’t mean cattle markets can’t make a comeback lasting several weeks or even several months, before descending later into a more-major cycle low.

Let’s look at the 15-year futures chart (below) for clues. The monthly live cattle futures chart shows that before 2010, some of the uptrends tended to run out of gas around $100. Later on in 2011 a downward break found support in that approximate area. Given this, we can draw a support line at $100.

This is a long-term target, however. It does not have high odds of being hit in the next few months. More likely, futures will find support above that area, quite possibly not far from where they are. 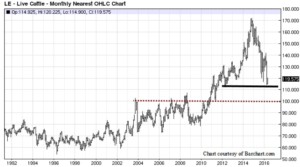 In 2012 a notable low occurred at about $112 and that area might represent a reasonable downside target on the charts.

The August future already traded there in April before bouncing slightly to $116 this week. There’s a good chance August revisits that $112 area before going off the board this summer.

US cash markets are around $118-119. If the low for futures does come in around the $112 area, that would mean cash prices only have to travel moderately lower to meet the expectations of the August future.

If you look at the futures prices from April 2016 through April 2017, you’ll notice they reflect ideas of a continuation of losses for cash markets all through summer, fall and winter. But if you look at the futures chart, it becomes clear just what a sharp cliff-drop the market has already taken. Normally when markets slam that heavily, there’s a very sharp bounce at some point in time.

Note too, commodities of all stripes are extremely volatile these days, with violent ups and downs both, and why should cattle be an exception?

In conclusion, cattle futures have tumbled a long way and from here, futures prices are too low to warrant being bearish. Cash prices might keep falling moderately to come into line with the discounted futures.

An upcoming post will take a look at feeder cattle charts and offer some thoughts on their low ebb for the current bear market.