A Look at the Market Cycles of Old

There’s a lot of value in looking back at the past, especially when it comes to market cycles. What follows are several long-term observations related to cyclic swings in the livestock business. 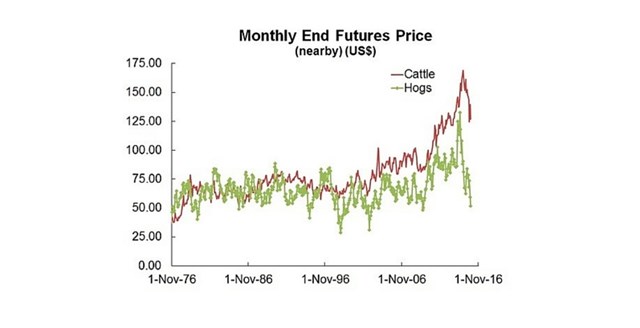 There’s a lot of value in looking back at the past, especially when it comes to market cycles. What follows are several long-term observations related to cyclic swings in the livestock business.

Cattle late to arrive to commodity party, late to leave too

As most producers know, agriculture has a history of swings from good times in crops and tough times in livestock, to the reverse.

You’ll also know that during much of 2008 through 2012, high grain prices were bringing good times to growers of crops and tough times for livestock.

Then came the reverse. Cattle came late to the great macro-economic upshift, following grains with a delayed reaction. It took a while for expensive grain to make expensive meat, but it happened, as it always does.

Now the downside is upon us: cheaper grain is making cheaper meat.

The high prices for livestock in the past, and cheaper grain the past year, are combining to motivate livestock producers to expand.

So the super-cycle highs for cattle and other meats are behind us. Producers ought not to expect such extreme prices as seen in 2014 for many years.

Long-term trend down but not precipitous

The good news is it won’t be a straight-line decline from here. Within the context of a long-term downtrend, there will be upward interruptions.

Indeed, as noted in our previous post, cattle are not corn or crude oil. Cattle supplies change slowly, and that will continue to be the case simply because herd rebuilding is a gradual process. There is a long delayed reaction from the time heifers are held back for breeding to the time this translates to more beef in the supermarket. Demand shifts are very gradual too. So it follows that the downtrend in prices should also be relatively gradual.

The liquidation of the beef cow herd was so long and so severe from the 190s to 2013 that beef supplies will not be burdensome anytime soon. The result is that profits for cow-calf operators are coming down but should not evaporate. We see the cow-calf industry coming through the tougher times of the big cycle in pretty good shape, as suggested in past reports.

While cow herd expansion is underway in the US, the calf crop is still small by historic standards. (In January, USDA pegged the 2015 calf crop at 34.3 million, up about 2% from a year earlier but still the first year-over-year increase in 20 years). Once underway, increased heifer retention and decreased cow culling can last for quite some time, usually several years. As this process continues, the impact of rising supplies is lessened by a smaller heifer and cow slaughter than during the years of liquidation.

Back in the 1970s it used to be said that when cattle were cheap versus hogs, in other words when live cattle and live hog prices were equal on a pound for pound basis, the marketplace would do the job of slowly but surely creating higher cattle prices in relation to hogs.

In those days the target coming from parity would be relative improvement by cattle, taking cattle to twice the price of hogs.

So what’s happening lately? Well on a pound for pound basis, live steers have traded now and then at more than 3.4 times the price of hogs. Highly unusual!

What’s ahead? As the cattle market gyrates through the next several years in a trading range that fails to challenge the great peak of 2014, there’s a good chance prices will maintain a wider than usual spread over hogs. After all, the cattle business has undergone decades of liquidation that cannot be quickly reversed.

But the current historically wide spread probably won’t last. Although cattle will still be higher-priced than the historic norm, the spread is extreme enough that it won’t hold up the decade ahead.

The cattle to hog ratio (or spread if you want to look at it that way) is a relationship that ebbs and flows, like so many other cycles.

Graph above shows exceptionally wide spread of cattle over hogs. The spread is likely to stay wider than in past decades but not as extreme as it has been.

If you recall our blog post from Jan. 11, we encouraged senior cow-calf operators to use the recent high prices for breeding stock and calves to go ahead and sell. Getting in and getting out of this business at the right time in the long-term cycles can make a huge difference to one’s financial well-being, we said at the time.

As of today, that analysis still stands. There’s still time to carefully consider your operations, and to consider scaling back if you no longer want to be in the cow-calf game for the long haul. The cyclic nature of the market continues to suggest that a great boom has past. We think the cow-calf industry will see a soft landing during the cyclic weakness ahead but the industry won’t be without challenges.

More in the future…

We will continue to write about the cyclicality in the ag industry and the implications for livestock prices and profits as time goes on. Keep checking in!