The cattle futures market is proving once again that the trip to the bottom is always quicker – and much crueler – than the climb to the top. After hitting six-year lows last week at around US$96, the nearby live cattle contract has now lost about 43% of its value in slightly fewer than two years. In comparison, the journey to the top from the same price in September, 2010 took just over twice as long. The implication for producers is clear: it’s pays to be patient when the market is trending higher, and it pays to act quickly and decisively once it begins falling. 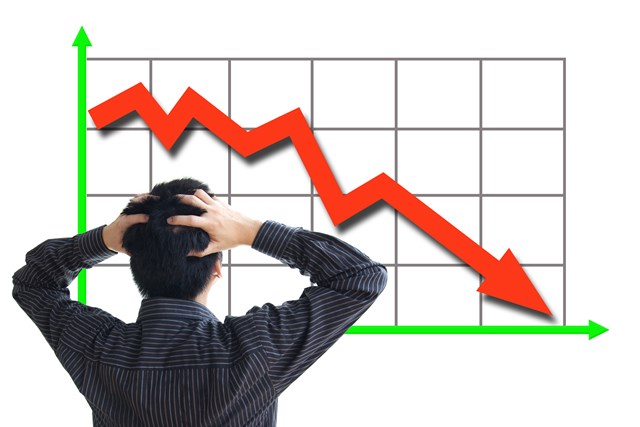 The cattle futures market is proving once again that the trip to the bottom is always quicker – and much crueler – than the climb to the top.

After hitting six-year lows last week at around US$96, the nearby live cattle contract has now lost about 43% of its value in slightly fewer than two years. In comparison, the journey to the top from the same price in September, 2010 took just over twice as long. The implication for producers is clear: it’s pays to be patient when the market is trending higher, and it pays to act quickly and decisively once it begins falling. 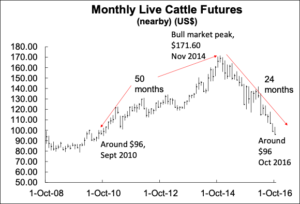 But therein lies the rub; How do you know when the market is poised to keep moving higher, and when it is likely to enter a period of prolonged weakness? After all, those producers who at least consolidated during the bull-market times of 2014 are now in a much better position to survive this extreme down cycle, than those who did not.

Firstly, it is always important to have some awareness of where things are at, in terms of the long-term cycles of old.

We’ll look at the key topping signals today, and follow up with the key bottoming signals in a future edition.

Here are 10 major cyclic topping signals to watch for – many of which were visible at or near the mountainous peak of a couple years ago:

2.  Extreme profitability: When prices are high, ask yourself: Are the profits on your farm and lots of others the best in many years? The best ever? Remember, extremely wide profit margins create expansion which eventually creates extremely thin profit markets and sometimes extremely severe losses. One extreme leads to the opposite.

3.  Lots of press coverage of the good times. Are newspapers, trade magazines and internet reports, full of stories about the high prices and profits? One newspaper article in 2014 talked about cow-calf people doing “cartwheels.” Well, cartwheels are a characteristic of a topping market. When the media is on the bandwagon, it’s time to get off the bandwagon – the ride is over.

4.  Do the charts show sharp uptrends lasting a long time, like three years or more? Very few bull markets trend up relentlessly for more than three years. When they do, you have to start being careful. Sometimes it pays to just look at a long-term chart. Forget about the reasons the market is going up, if it’s been going up for a long time that means the bull market is getting old. A long-term chart gives you an easy-to-see pictorial of hard to understand fundamentals.

6.  Are ideas of chronic and ongoing low supplies/high beef prices circulating? Are they publicized by the media and widely believed by consumers? This doesn’t happen with every cycle but does with some. If the price of beef gets so high that politicians take up the consumer cause, then you have a really sure sign the bull market is over or nearly over. By the time governments think something is wrong with the market, that’s when the market is already just about finished its natural process of self-correcting.

7.  “This time it’s different.” When people see all of the above but say, “this time it’s different,” this time those topping signals don’t matter… that’s when it’s time to look out. The most bullish excuses, rationalizations, and proclamations about why bull markets must go higher, ever higher… these tend to occur after prices are already high and tipsy. Be careful about confirmation bias. Maybe you’re buying into the bullish ideas primarily because you want to.

8.  Young people want in. Every now and then, we see young people chasing the money. They’re not anxious to jump into a business that’s been tough for many years, which is sometimes the best time to get in. Instead, a lot of young people tend to be attracted to what’s been profitable just the past few years – which is about the time the cycle is about to turn down.

9.  Watch heifer retention and other indicators of herd rebuilding/expansion. The turns of the cattle cycle can be signaled well ahead of time by shifts in the herd size. Before the bull market that peaked in 2014, cutbacks had been seen for many years in the major US markets. Likewise, two years ago we saw increased heifer retention for breeding. So we had tip-offs there’d be more beef today. It’s important to monitor heifers held for breeding and cow numbers (this is the “factory” that provides a very basic foundation for the industry’s output) for at least some general ideas of the supply trend.

10.  Contrary reaction to bullish news. We sometimes refer to this as the “market’s tone.” Pay attention to how the market responds to major USDA inventory reports and high profile announcements on trade and disease issues. A market that fails to move higher despite widespread and highly-publicized bullish news probably won’t rally at all. It has bearish risk. Be cautious.

So… the shifting of the cattle cycle comes with signposts. Not all signposts are seen when you travel along the road of the unknown. However, the ones above are a few to watch for.

By the time we see another line-up of the signs and signals above, this article will be old. It could be 8, 10 years down the road before you see the above warning signs coming together as a group. By then, much will have changed. But the nature of the markets and the way people respond will not change. Many of these indicators will stand the test of time.

In a future edition we’ll take a look at the typical signals and events to watch for as hints of cyclic lows.  We are seeing some signs of an interim cycle low now, and will check in with more detailed thoughts in the next few weeks.